The Sonic Gypsy (AKA Mickey Banks) is the son of a BSA riding, mountain climbing, boat building nuclear scientist and part time explorer. He was brought up in the rainy mountains of northern England by the Irish Sea on motorcycles, snakebite, The Doors and John Lee Hooker.. Mickey was lead singer with groundbreaking major label rock band Scorpio Rising, signed by the legendary Seymour Stein (Madonna / The Ramones) to Sire Elekra and recording with Steve Osborne (Rolling Stones, U2), Paul Oakenfold and Teo Miller (Verve, Blur, Daisy Chainsaw) touring and playing many major festivals playing on the same stage as Nirvana, The Smashing Pumpkins and others..

2016.. Mickey (The “Sonic Gypsy") is back, and has unleashed a stunning new album and an amazing new sonic electric delta rock n roll band.. The Sonic Gypsy is a very rare thing, a poet, boatman and sonic bluesman living on the real English delta.

As well as playing live shows all over the UK, he has become the “Kerouac of The Canals” documenting his outsider lifestyle and adventures, constantly travelling the UK’s waterways rivers, swamps and canals aboard his barge “The Heart Of Gold” in “The Lonesome Traveller Diaries”..

To read the full story of Mickey Banks AKA "The Sonic Gypsy" and the making of "Born A Rolling Stone", CLICK HERE

The Sonic Gypsy debut album “Born A Rolling Stone”, recorded at Demon Studios in Manchester, is now getting airplay in the UK and Nationwide USA Airplay, critical acclaim on SHOOTER JENNINGS ELECTRIC RODEO SHOW on SIRIUS XM, RADIO CAROLINE and growing airplay on blues and rock radio stations all around the world leading to shows in the UK with Country star Shooter Jennings and acclaimed US rock bands Skinny Molly and Nashville Pussy..

The Sonic Gypsy is 100% independent and has no label, management or agent, and until now has been playing purely by invitation and public demand.. so if you are interested in booking or working with one of the wildest and most entertaining rock n roll bands on the planet, please get in touch..

DISCLAIMER: Warning: Sonic Boogie Woogie is Dangerous. By visiting this page you immediately and irrevocably absolve The Sonic Gypsy from any blame whatsoever for any of the following: accidental injury, physical, mental, metaphysical, financial, spiritual or otherwise, unwanted hallucinations, deviations from previous life plans, sudden invisibility, accidental death, uplanned time travel, damage to hearing or any other organic apparatus including limbs, loss of self esteem, loss of financial or social status, damage to fixtures and fittings or property (including lending him your car or any other mechanical or electrical device), splinters, bruises, dents, loss of faith, unexpected religious conversion, loss of sense of humour, visitations from the devil, loss of dignity, clothes or job or all three, or any other bizarre and unexpected change of perspective or perception or personal circumstances resulting from knowing him, hearing him play, listening to his advice, believing anything he says, buying him a drink, joining in any of his crazy schemes, lending him your identity, getting in a vehicle or any other form of transport with him, being his friend, encouraging him in any way, knowingly or unknowingly standing within 10 feet of him for more than 10 seconds for any reason or looking at him in a funny way, in ALL territories, universes, dimensions currently known to mankind, real AND imaginary, and inclusive of those yet to be discovered. Omnia Vincit Amor.. Ad Infinitum, Et Ultra

By signing up you agree to receive news and offers from Sonic Gypsy. You can unsubscribe at any time. For more details see the privacy policy. 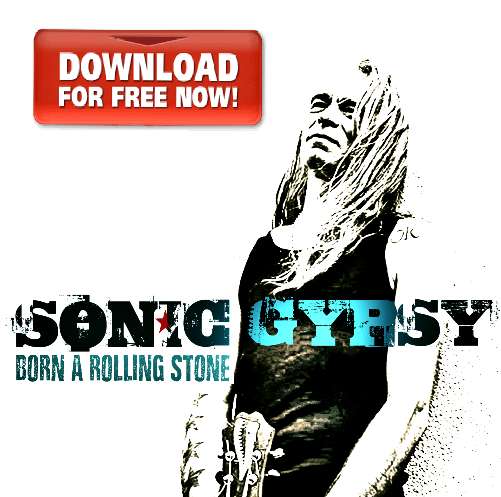