"Elaine has a voice which can be both hauntingly beautiful & deeply emotional, coupled with a powerful stage presence. Her material ranges from folk through to blues, but it is her rich repertoire of perceptive, intriguing self penned songs combined with her guitar work which sets her apart”. Rosie Upton, Bath Evening Chronicle

Elaine began her singing / song writing and performing career as a solo artist back in the early '90s supporting Dave Cousins & Brian Willoughby, Roy Bailey, the Albion Band, Isaac Guillory, and many more. As well as having given plenty of interviews on the radio, Elaine has also been featured singing her own songs on television a number of times. She has performed at folk clubs and festivals throughout the UK too and with her duo, with first violin player, Jane Eldridge, she was booked at Glastonbury and Guildford Festivals.

In addition to gigs with the five-piece full Kindred Spirit Band the Kindred Spirit Duo of Elaine and Martin Ash also play her original numbers for appropriate gigs. You can view the duo performing original material via the "Original Showreel" video, which is one of the lower adjacent videos. 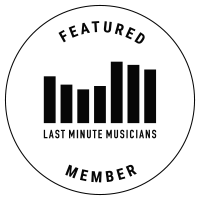