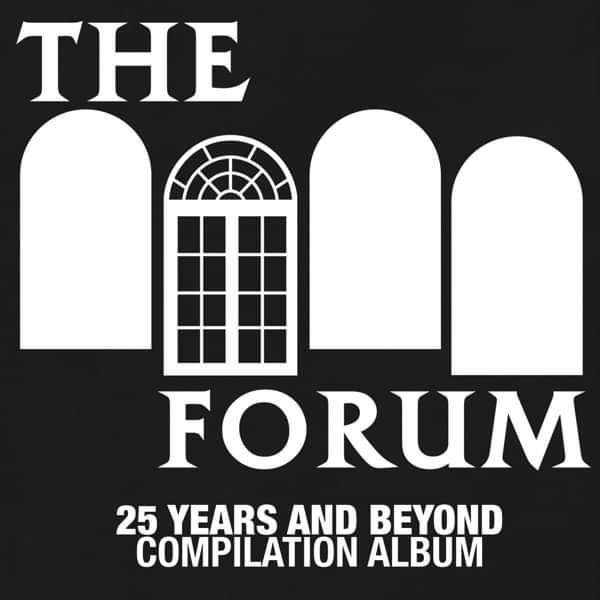 A physical CD copy of 'The Forum: 25 Years & Beyond' Compilation Album will be sent in the post.

25 years of operating is an achievement for any business, but in the world of grassroots music venues where almost everything has to be done on a shoestring and there are many people all wanting a slice of the same pie, making it to 25 years is an absolute victory.

So it only makes sense that The Forum in Tunbridge Wells, Kent is going all out for their 25th year. With sold out shows from Frank Turner, The Wedding Present and Pale Waves already under their belts for 2018, the year ahead is only going to get bigger, with more shows and a compilation CD on the way. '25 Years and Beyond' is a record consisting of local bands that encapsulate the past and present of The Forum. "I didn’t want the anniversary to be just nostalgia, but to also look towards the next 25 years. A compilation album featuring the exciting, emerging artists who play at The Forum regularly now, and who will go on to do more in the future, was the perfect way to celebrate the next 25 years too" states Isobel Dormon of The Forum.

"The bands were chosen by the team who constantly put on gigs, festivals and events and know who are the most exciting, talented musicians rehearsing and playing gigs at The Forum. We wanted to choose bands who reflect the many genres which play the venue, so we have punk, rock, electronic, acoustic and pop featured on the record. Joeyfat are included as they were the first band to play the Forum in January 1993, and they have been having a resurgence with a BBC Radio 6 session and a number of gigs in the last year" she continues.

Each artist featured on the album will be curating or headlining a show at The Forum in 2018, to ensure the celebration of the local bands that have supported The Forum continues throughout the year. The first show is happening on the 4th of May with Dead Ceremony headlining.  The last 25 years have been a whirlwind, with musicians like Adele and Green Day gracing the stage in their early careers. The next 25 years has the potential to be even better. "We're looking forward to more new music and experiences that you could not get anywhere else but at a small grassroots venue. We're also excited about how many diverse events we have going on as well as the gigs, from theatre season, the return of Sunday Sessions, The Stable, Pride, International Women's Day, and of course Unfest is always a highlight."

By signing up you agree to receive news and offers from unlabel. You can unsubscribe at any time. For more details see the privacy policy.