If, as the cliché goes, a band has a lifetime to prepare for their debut, then The Wytches second album All Your Happy Life draws on a lifetime’s worth of new experiences shoehorned into two whirlwind years since their acclaimed debut. Their day beats your month. Their week beats your year. There’s no difficult second album syndrome here. This black-hearted set is a combination of heavy comedown psychedelia and bilious and brilliant baroque ‘n’ roll. It’s portentous and scathing. Scabrous and bold. Utterly nihilistic.

‘A Feeling We Get’ draws the curtains and tries to make sense of the world; here the English sun is an insidious thing serving only to illuminate a world of confusion. ‘Throned’ writhes and wriggles in a primordial swamp of sound before lurching out, Sabbath-like, into larval fields of burning magma. ‘Ghost House’ meanwhile is pure funereal, death-tripping doom, the stillborn offspring of The Beatles’ ‘Helter Skelter’.

There’s juxtaposition here. Duality. And droll sarcasm too. There’s the sardonic title itself, All Your Happy Life, taken from a lyric in ‘Throned’. Then there are the songs: ‘Can’t Face It’. ‘Bone Weary’. ‘A Dead Night Again’. This isn’t no bummer trip though. Out of this tar-thick morass comes feelings of survival, redemption, strength. Defiant celebration by way of a musical black mass. On All Your Happy Life The Wytches are here to remind that life is to be experienced, in all its many favours. It is to be feasted upon until the marrow has been sucked from the bones, and the bones used as toothpicks.

Influences and inspiration is drawn from unexpected places – reading Tolstoy’s stories of dysfunctional relationships on the tour bus, digging the warm Hammond-and-acoustic tones of Elliot Smith, loads of underground metal band – but mainly it is informed by observing small town English life with new eyes, having traversed the planet on that first wave of success that followed their 2014 debut album Annabel Dream Reader. It’s not so much the sound of the calm after the storm, but the howling vortex that follows in its wake.

All Your Happy Life marks a creative leap for The Wytches. Some might say it is the sound of a band finding their place in the world but really it is about world being allowed to enter the sphere of The Wytches - on their terms. It has taken commitment and a half-decade’s toil to get to this point and the creation of All Your Happy Life follows a period in which purpose and direction were questioned and scrutinised.

“When I was at university in Brighton I had to choose between giving a presentation or playing a gig we were offered,” singer/guitarist Kristian Bell recalls of The Wytches earliest years. “I chose the band and consequently got kicked out. It also ended a relationship. In the more exhausting on-tour moments you question these big life decisions, but then I remind myself that all I’ve wanted since the age of eleven was to play music. I was gigging in my first band at thirteen, and ultimately chose actual songwriting over studying songwriting. It’s still all I ever want to do.”

Adolescent fantasy versus cold adult reality is a theme here then, as is identity. Mocked by their friends in the hardcore scene for making a break for greater success beyond the sonic limitations of the genre - and for being in the NME - yet too malevolent and abrasive for the indie world, where, they wondered, did The Wytches fit in? Nowhere, it turns out. And that’s what makes them special. “A couple of years ago we were playing a festival in Portugal and I was backstage eating my breakfast,” says Kristian. “I noticed that Electric Wizard were to one side of me, Hawkwind to the other, and the Swedish doom band, Graveyard, who I love, nearby too. In that moment I realised that, yeah, it’s actually OK to admit to being simply a very loud rock band. It’s who we are and we’re not going to apologise for that.”

The Wytches occupy their own universe and All Your Happy Life is the new soundtrack, a road trip of a record with an Altamont-esque end times outlook and anxiety forever floating around the peripherals. They’re selling hippy wigs in Lidl, man...

Catch them live and you’ll see a legion of Wytches fans, built gig by gig in the five years since Bell and drummer Gianni Honey relocated from Peterborough to Brighton to study, and roped Dorset-born bassist Daniel Rumsey into their ranks. Throughout 2012-13 they toured with Blood Red Shoes, The Cribs, Drenge, METZ, Japandroids, a time during which The Guardian noted that Bell sounded “possessed, wracked...like Alex Turner having a bad trip.”

Early singles ‘Digsaw’, ‘Beehive Queen’ and ‘Robe For Juda’, and a low-key limited edition cassette ‘Thunder Lizard Revisited’, lead to signing with Heavenly in February 2014. Debut album Annabel Dream Reader followed just six months later. Keen exponents of the DIY punk ethic, The Wytches also published their photograph book Full Time Meltdown. With their dreams of academic days behind them, Kristian relocated back to his home village of Yaxley in Cambridgeshire. Here he decompressed and began to work on this new set of songs that took shape amongst the familiar surroundings of his childhood. “We’d do these big world tours and then go back to a little village near Peterborough,” says Kristian. “I’d have to deal with coming down off that adrenaline high and worrying about meeting people’s expectations and constantly trying to satisfy everyone. That’s one simple explanation for the bleakness and nihilism on this record, but really it’s always been there within me.”

In 2015 The Wytches went first to Chapel Studios in Lincolnshire and then into Toe Rag in East London to record what their singer describes as much more collaborative group effort. Deep thought went into the arrangements. All bad ideas were discarded. The fat was trimmed from the bone. As ever though, the feel is resolutely live. Preferring not to attempt to polish coal, The Wytches prefer to keep it dark and dirty, wired and untamed. Wanton and wild. Lo-fidelity but high velocity. Plugged in and straight from the source.

The result is All Your Happy Life. The Wytches are: Kristian Bell (vocals, guitar, organ), Daniel Rumsey (bass) and Gianni Honey (drums) Ben Myers. May 2016. 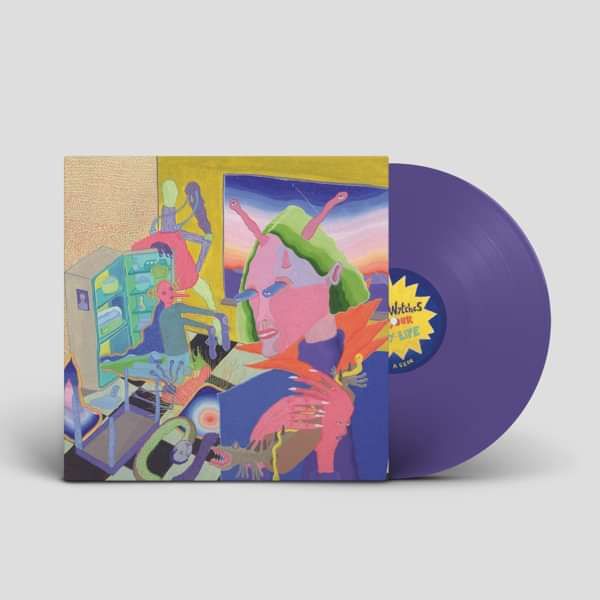 The Wytches - All Your Happy Life 12" Coloured Vinyl