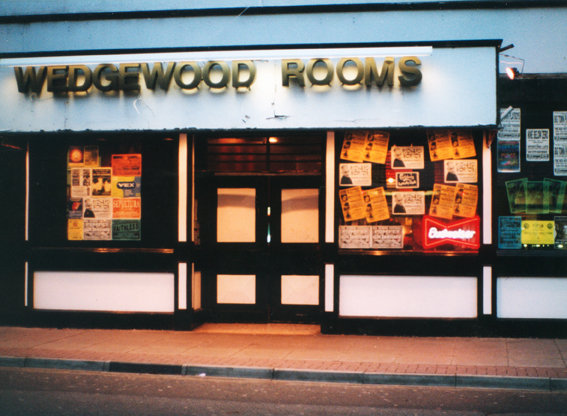 One of Southsea's oldest landmarks, The Wedgewood Rooms served as a storage space in WW2, a ballroom, a jazz club and a community function room where famously Arnold Schwarzenegger competed in a body building competition in 1968. It is as a music and comedy venue however that The Wedgewood Rooms gained its international reputation. Since launching in 1992, it has seen some of the world's biggest international touring artists take to its stage, earning a reputation as one of the UK's most prestigious independent venues. Rock & Roll Hall of Fame inductees, Mercury and Brit Award Winners have been regular visitors to the venue since the early 90's.

For almost 30 years The Wedgewood Rooms has been at the cutting edge of music in Portsmouth. Working in partnership with independent regional promoters PVC, it has built a legendary reputation as arguably one of the best small venues in the UK, playing host to some of the biggest bands and breaking new acts into the world; Oasis, Pulp, Stereolab, Jeff Buckley, The Strokes, Muse, Twenty One Pilots, Catfish & The Bottlemen, Biffy Clyro, Paloma Faith, Barenaked Ladies all played shows on their way to success. The list is endless and reveals the huge range and diversity of talent on display at The Wedge.

Even after bands go on to fill large capacity venues and stadiums they often return to the cozy confines of The Wedge for festival and tour warm-ups. Portsmouth music fans have been lucky enough to spend an intimate evening with Primal Scream, Kasabian, PJ Harvey, Gorillaz, James, Feeder, Placebo, Supergrass and Razorlight to name a few. Most recently Billy Bragg performed a residency with us, playing 3 sold out shows, while legends like Buzzcocks, Johnny Marr, Damon Albarn, Lee Scratch Perry, and Thurston Moore have dropped in for special events. We were also blessed to witness one of the last live shows from Joe Strummer.

Along with the touring acts there is a strong emphasis on local band nights which help give acts from Portsmouth and the surrounding area a wider fan base and a leg up on the music ladder. Since 1992 we’ve aimed to encourage and support new talent, providing support slot opportunities when available and hosting an annual Showcase for local bands. Many of which go on to secure support slots with touring acts and recognition within the local music community. Some have gone on to headline their own sell-out shows here as part of a larger UK tour. With the addition of a smaller sister venue The Edge, newer and local acts are offered a unique space to perform in and promote their own shows. This is also a great place for promoters and photographers to hone their craft.

From Jack Dee to Jack Whitehall the biggest names in comedy all launched their careers at the Wedge: Portsmouth's original and oldest Comedy Club! Over the years many household names have graced the trusty boards at the venue as part of a national tour, or at our fortnightly Wedge Comedy Club in collaboration with Off The Kerb Productions

In addition to the Comedy Club, our Comedy On Tour shows allow comics the chance to drop in on their latest UK tours; an opportunity to catch the very best up-and-coming, and established, comedians in the world of comedy today! Recently we’ve been visited by Rob Newman, Simon Evans and Flo & Joan to name a few.

Everyone has their favourite all-time band but unfortunately not everybody will be lucky enough to see them play live.

The Wedge plays host to many tribute bands that bring the music and atmosphere of the original band to the stage. Whatever style of music you enjoy, chances are we have a tribute act for you! Long gone are the days when tribute bands were seen as cheap or corny copies, cashing in on the success of the original artists. These days they are professional outfits that spend time and effort studying their chosen performer and rehearsing to get every sound as close to the original as possible.

No wonder acts such as the The Smyths, The Total Stone Roses, Limehouse Lizzy, Oasish, Dirty DC, Whole Lotta Led, and local favourites Fleetingwood Mac and Rhythm Of The 90s keep coming back to packed houses. We pride ourselves on booking the very best tributes and if you're sceptical about tribute acts, you won't be after seeing this lot.

Tribute shows give you an opportunity to enjoy the music and soak up the kind of atmosphere that only good musicians can create, and to re-live the artistry of bands long gone.

Whilst The Wedge is renowned for its live music and comedy, it has a long history of staging cutting edge theatre and spoken word events.

The first venue in the City to stage The Vagina Monologues, we have become the Portsmouth home of Townsend Productions who, over the last few years, have brought theatre shows including the one man magic lantern show The Ragged Trousered Philanthropists to our stage. Recently the Certain Curtain Theatre Company brought their highly acclaimed production Lady In Red to the venue, a domestic abuse drama in support of local support service Aurora New Dawn.

We’re proud to work with some amazing local promoters and charities to raise funds and awareness for multiple causes.

We’re also the home of a Beatz Club a night in conjunction with Gig Buddies. These nights are designed to encourage the inclusion of individuals with disabilities and are an accessible event for everyone.