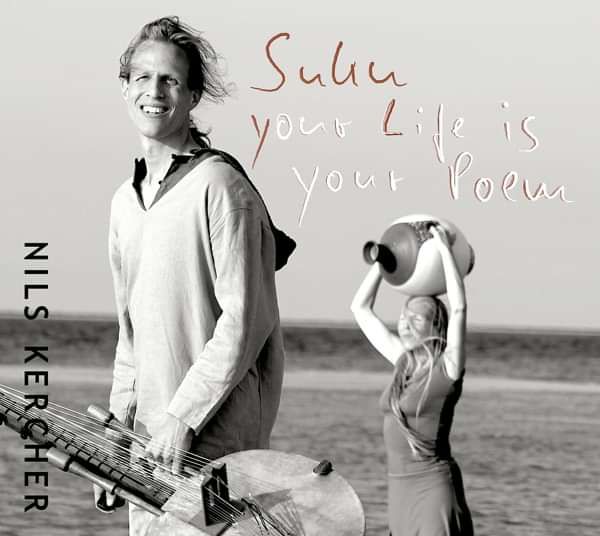 On his third album SUKU we hear the highly versatile musician amidst his band as a proficient kora and balafon player, as an imaginative master of percussion, and as an expressive singer with a broad-ranging repertoire of timbres. Powerful Afro rhythms, swinging balafons and minimalist string-playing form a series of fantastic contrasts while later passing into an almost sacred sound space with a quietly oscillating pulse. His partnership with Kira Kaipainen continues to be a central element. Her soft voice and her lyrics accompany Kercher on a journey of sound that still draws its nourishment from its West African roots while constantly seeking out new paths of its own and at the same time embracing the vast Nordic landscapes. Martinique singer Sylvia Laubé blends in perfectly with Kira´s Scandinavian tone colour to create the harmonious and rich choirs the listener finds throughout the album. Kercher has also invited the Senegalese singer Mariama Kouyaté to perform the song „Yiri Fere“ as a duet. Her exquisite voice flowers beautifully in this moving composition.
The ngoni virtuoso Barou Kouyaté brings an earthy colour to the musical texture. In addition, his acoustic guitar accentuates Kercher´s melodic kora playing with great sensitivity. The two artists, who come from very different backgrounds, share a natural and organic musical dialogue, which attests to their extraordinary flexibility and poise. Alongside the dialects Soussou and Malinke, spoken in Guinea, the album also features lyrics in Bambara, the chief language of Mali and includes tunes written in English and Finnish. The nine songs feel like a cycle of verses that can leave you enchanted long after the music has faded away. Kercher´s achievement is to successfully merge the lyrical, refined aspect of his compositions with his passion for rhythm and energy. The way these two opposites always manage to regain their balance is what makes listening to SUKU such a fantastic experience.