LINK At The Barrier 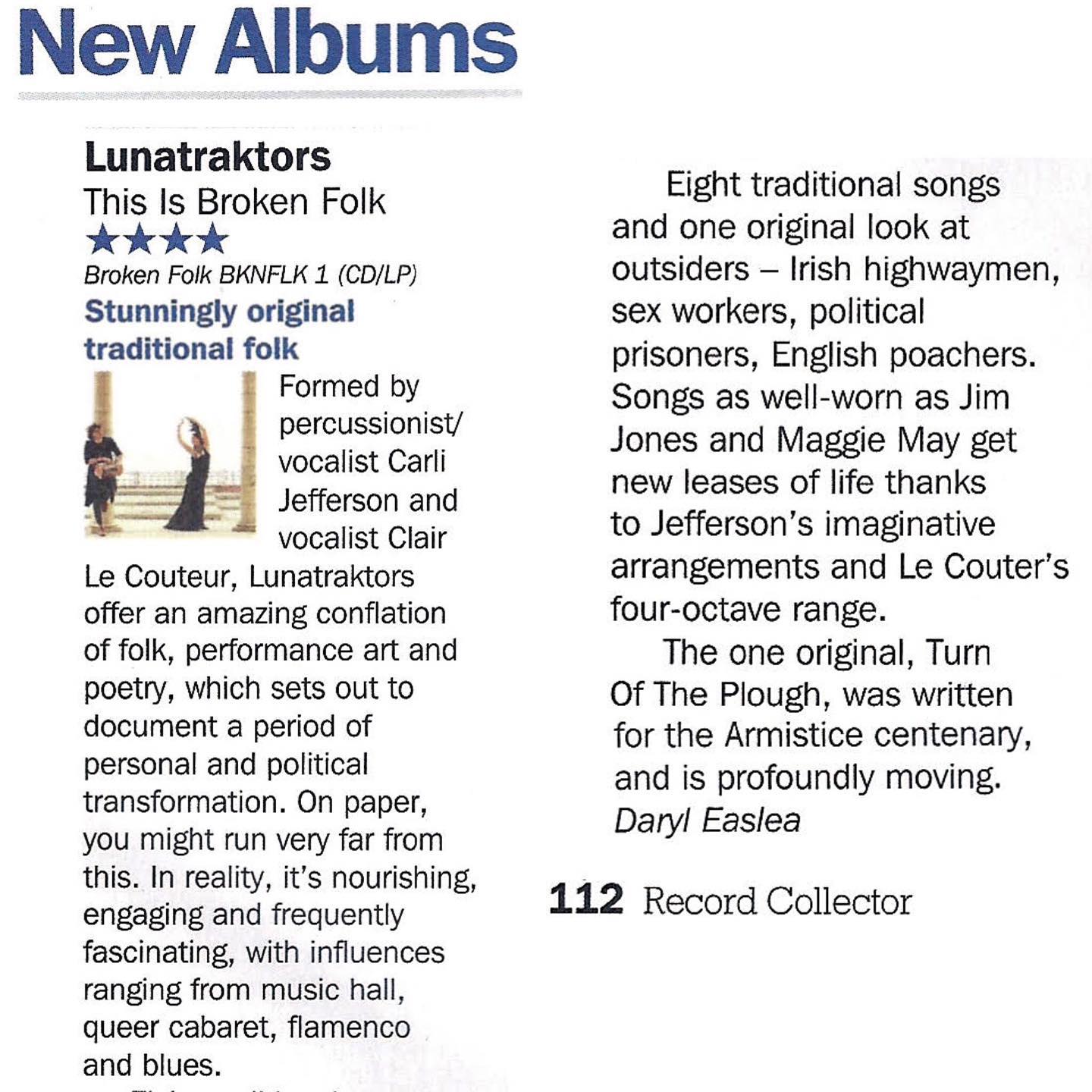 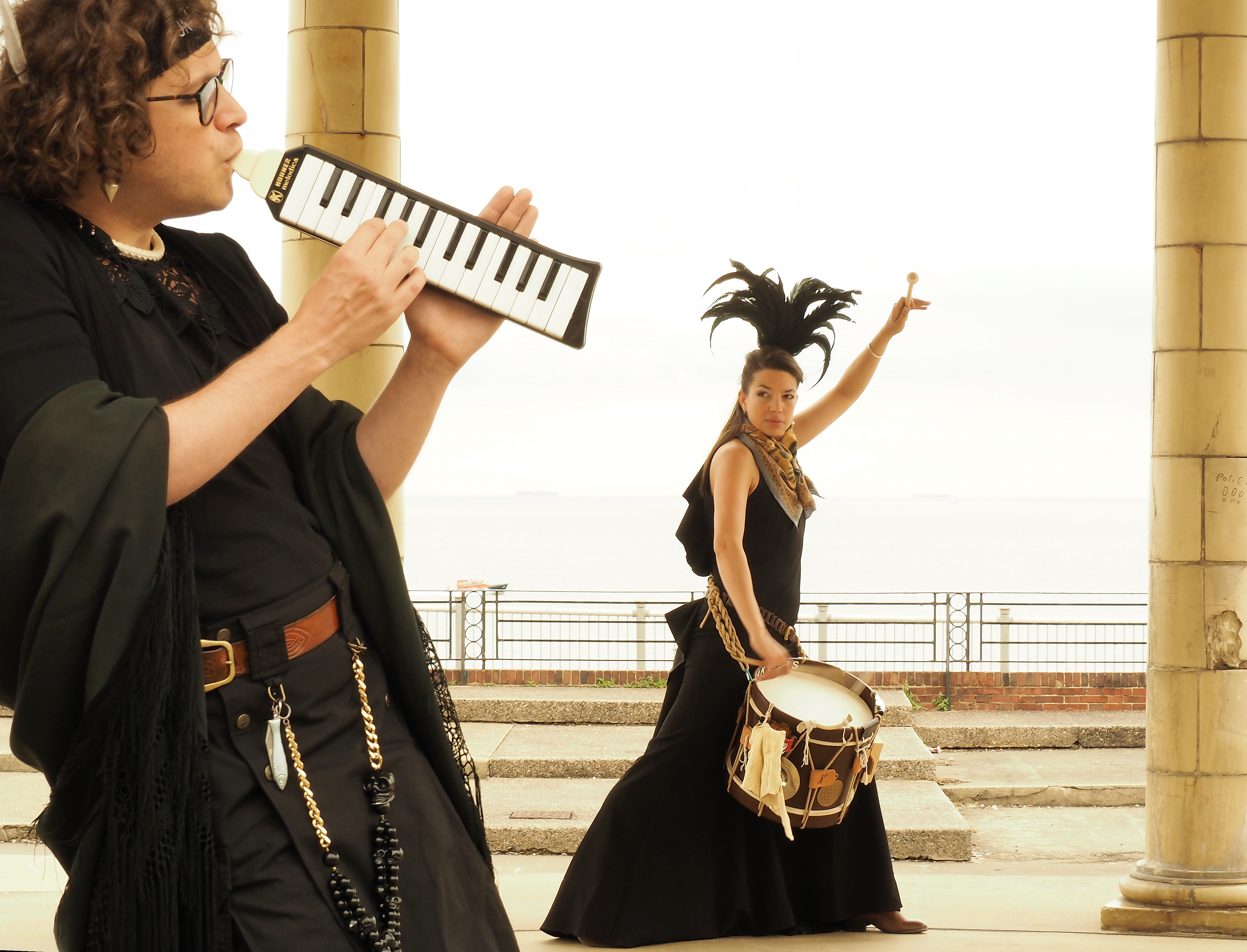 A trans-genre duo bursts out of Kent with the minimum of arsenal (voice and percussion), and it's a healthy blast of fresh air through British folk. A chance to remember, in the throes of the Brexit headache, that these proud isles have traditionally been open to migratory music.

Who coined the phrase 'broken folk'? For once, the label-makers can rest. The band took care of tagging their music on the packaging of their record. This Is Broken Folk is the title of the first Lunatraktors album. And all signs indicate that, in order to appreciate how broken their folk is, you must go see for yourself, in the flesh, in voices and drum skins, these two strange birds from Margate, Kent – the tip of the English chin that juts out toward Dunkirk.

Their looks are already a sort of challenge: Clair Le Couteur is a kind of John Lennon of the new century, that you must designate by 'they' because he/she is transgender. Carli Jefferson, doubly their partner, gives the effect of a dolled-up dolly who would happily beat you with her sticks if you called her that. With these folks, monsieur, one relishes violent contrasts.

The duo's album is a collection of of traditional antiques where daily life isn't a barrel of laughs. Blood flows, rebels are threatened with hanging, lovers betrayed, sailors robbed by an expert whore, hard-headed farmers chased or shot by police, and sinister ravens circle over this stew of corpses.

From the archives British folk to the ghost of Leonard Cohen

Black Raven, which opens hostilities, is the transposition of a Cossack song imported from Russia into British folklore—this in advance of Brexit. Several tracks (Ben Hall, The Catalpa, Jack Donahue, Jim Jones) have more or less the Australian drawl and deep tan of bushrangers. Traces of a time where Antipodes were that distant Eldorado where you could make a new life, or a hell to end your days. If the light-fingered Maggie May is sent to Tasmania, it is the Botany Bay prison colony, in New South Wales, that’s promised to the tough Jim Jones.

Funny coincidence – Botany Bay is also the name of a nice beach for warm-blooded swimmers near Margate. To assemble their puzzle, Clair Le Couteur naturally dug through the archives of British folk, but might also have looked at the sea. Some of their finds haven't always been neglected. Bob Dylan appropriated Arthur McBride and Jim Jones for his Good As I’ve Been To You from 1992. The latter is also sung with touching awkwardness by Jennifer Jason Leigh in Quentin Tarantino's The Hateful Eight (2015). As for the throbbing Ben Hall, an air on flute making an exceptionally prolonged ending, you could swear you saw the ghost of Leonard Cohen, dressed in black of course. Cohen whose Lover, Lover, Lover is covered by Le Couteur and Jefferson, a song perfectly adapted to their style with its bed of percussion.

Listening to Lunatraktors gives the impression of entering a musical dimension hitherto unknown. Ironically, this effect of utter strangeness is achieved through the most rudimentary means possible. Imagine children locked up in a cave after all their digital toys have been confiscated, as well as the phone connecting them to streaming platforms. Well, in the case of Clair and Carli, you find them delighted.

Digging around, they came across all this old stuff down a hole in the space-time continuum, and greedily fed on its blood, its flesh, sucked the bones. The first sings like someone possessed, the second re-invents a tribal rhythm by beating on her body, tapdancing or more classically, hammering on drums (there are some in the caves). And that's folk? Non monsieur, that's broken folk. A little punk, rock’n’roll, hip-hop, primitive and… futuristic?

The question of genre/gender made obsolete

With Lunatraktors, these seeming opposites dance a strange tango: roots and queer, murder songs and cabaret, erudition and performance, body and soul.  The question of genre is outdated, as it has always been in music – no need for us to tell you that story again. Under a layer of dust that evaporates in love's incarnation, the shadows of colonialism, injustice, and betrayal are re-embodied again in a cruelly contemporary form.

We know of course the news has no need of minstrels to load its boat with all the world’s castaways. And to reassure any non-Anglosaxons: when you hear Clair Le Couteur roll out their “and the little wee drummer, we flattened his pow, and we made a football of his row-de-dow-dow” you’ll certainly judge as we have that translation is unnecessary. It remains for us to verify the impact of this raging duo on stage. Ah, they're playing Paris today the 21st of May at The Window and on the 24th at Toloache…

Power to the people as culture festival returns – Thanet Extra 27.02.19