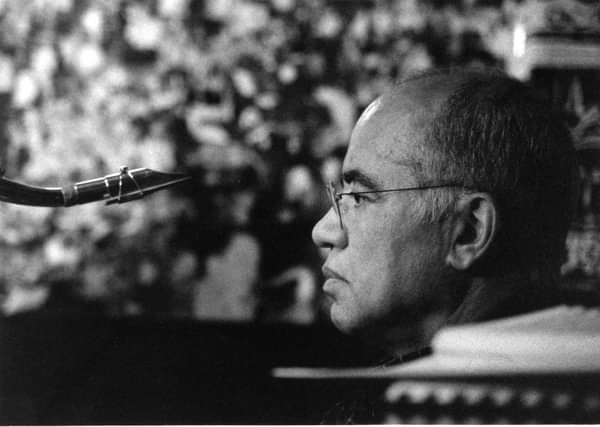 Fantastically playful, inventive and one of Britain’s leading tenor saxophonists for over 50 years,** Art Themen** performs with his trio from the latest album ‘Thane and the Villeins’, with organist, Pete Whittaker and drummer, George Double.

"A first-rate trio..an excellent set..Themen is one of the very few totally original, utterly engaging jazz musicians around" ** Dave Gelly - THE OBSERVER**

Exciting and innovative saxophonist, Art Themen has been a beloved character of the British jazz scene for many years, famously combining his role as a consultant orthopaedic surgeon with saxophone duties in the bands of Alexis Korner and Stan Tracey among many others. Described by The Observer as "One of the tiny handful of undeniably perfect jazz musicians”, he remains as brilliant and inimitable as ever.

With organist Pete Whittaker, formerly of The Nigel Price Organ Trio, and drummer George Double who has worked as sideman to Shirley Bassey and Jack Jones, Themen has formed a new trio. Their album “Thane & The Villeins” is a collection of groove-led re-imaginings of quirky curiosities from the jazz canon, acting as a perfect vehicle for the twinkly mischief of this genuine grandee of British jazz.

*Art Themen (Saxophone). * Born in Lancashire in November 1939, Art played clarinet at school and in 1958 went to Cambridge University to study medicine where he played in the University jazz group. He moved to London in1961 to study at St. Mary's Hospital Medical School and began to play on the London scene with Dave Gelly, Alexis Korner and Graham Bond. He successfully combined his medical career as a consultant orthopaedic surgeon with being a popular jazz musician. He began working with Stan Tracey in 1974 and continued with various Tracey groups until 1995. He was now playing soprano sax and sopranino sax as well as the more usual tenor sax.

He started to work with Michael Garrick in the 1960s and continued to work with Michael Garrick's Sextet and with Don Weller during his long association with Stan Tracey. He has also accompanied many visiting US musicians including Al Haig, Red Rodney and Billy Mitchell and worked with Nat Adderley. With various groups he has toured extensively including India, the Middle East, Greece, South America, Switzerland, Indonesia and played at many festivals. He has a quirky, very original style of playing.

He led own quintet or quartet from 1996 and co-led a band with Alan Barnes and he has continued to freelance into the early 2000s with Georgie Fame and Don Weller amongst others. He now leads the trio ‘Thane & The Villeins’ with Pete Whittaker & George Double.

*Pete Whittaker (Organ). * Hammond Organist Pete Whittaker studied music at the University of East Anglia, gaining a masters degree in electroacoustic composition. Having harboured since his mid-teens a subconscious love of jazz, Pete became very much into the genre while at college. Jazz piano in due course gave way to the discovery of that force-of-nature known to the world as the organist Jimmy Smith, the single most important jazz Hammond innovator ever. The sound of those old Blue Note and Verve albums from the 1950s and 60s grabbed Pete by his charity-shop lapels and made him determined to recreate the sounds for himself.

Pete was fortunate to gain wider experience and exposure in the 1990s by touring with a couple of high-profile rock bands. The first of these was an Indie-ish melodic rock band (with a distinct folk-music influence) called The Wonder Stuff. Pete toured UK, Europe and North America with them (on and off)from 1991 to their initial disintegration in 1994.

Since moving to London in the late 1990s, Pete has had his backside kicked (musically and literally) by many fine jazz musicians. He will be eternally grateful to them all, and strives to learn from their talent and his own mistakes.

He is active on the British jazz scene and appears regularly at Ronnie Scott’s club in London and elsewhere as a freelancer (with Chris Ingham, John Etheridge, Art Themen, Digby Fairweather, Derek Nash and many others). He is also curator of Hadleigh and Southwold Jazz Clubs.

George is a senior drum kit consultant for Trinity College London. His books and arrangements are published by Trinity and Faber Music, for whom he has run seminars and workshops in Hong Kong, Singapore, Malaysia, Dubai and Abu Dhabi as well as at MusikMesse Frankfurt, the London Drum Show and around the UK. He worked as an examiner for Trinity and formerly, Guildhall School of Music and Drama from 2002-2016.

The gig is presented by Collage Arts Karamel N22 Sessions.