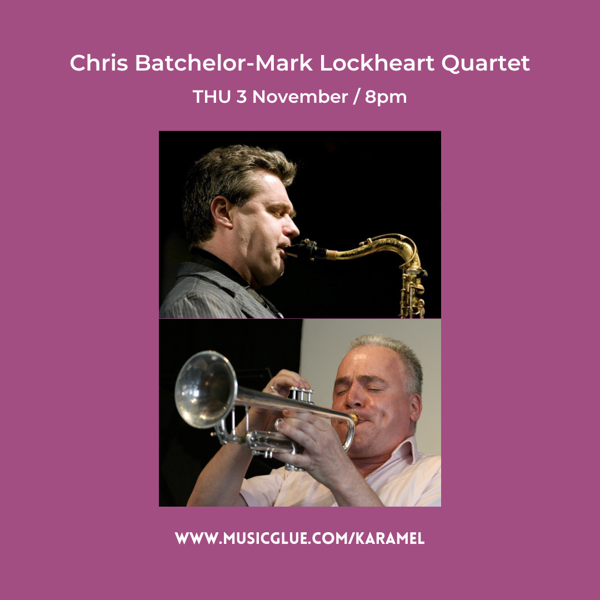 Mark Lockheart is a multi-award-winning tenor sax player who first made his name working with seminal band Loose Tubes in the eighties, and whose mastery of modern jazz has kept him at the forefront of the music ever since. Co-founder of the universally regarded “The Perfect Houseplants” Mark has toured and recorded with Django Bates, Mike Gibbs, Mark Anthony Turnage and his own 11 piece “Scratch Band” as well as Seb Rochford’s highly acclaimed “Polar Bear”. A former Peter Whittingham Award winner, his album "Ellington In Anticipation" was the MOJO Album of the Year (2014) and to add further glitter to an already stellar CV he was named Jazz FM’s “Instrumentalist of the Year” (2016). Most recently Mark has completed a major jazz/orchestral work titled "Days on Earth" for jazz sextet and 30-piece orchestra, released on Edition Records (2019). And if all that wasn't enough he is also a highly respected educator, writer and arranger.

Chris Batchelor is an innovative and creative trumpet player and composer based in London. As well as leading several projects, including the avant-trad band Pigfoot, he is also featured as a sensitive and versatile soloist in many highly regarded groups on the European jazz scene, and is a prominent soloist and composer in the re-formed Loose Tubes. He has played alongside international stars such as Michael Brecker, Sam Rivers, Hermeto Pascoal, Tim Berne and Uri Caine. In November 2009 he was selected to receive the prestigious Paul Hamlyn Award for Composers.

"Lockheart is a consummate saxophonist and an original and versatile composer" The Rough Guide to Jazz; “inspired and imaginative” The Times; “compelling” Guardian

Chris and Mark will be joined by Tom Herbert on bass and Will Glaser on drums.

The premises has a fresh air ventilation system installed throughout the restaurant and theatre. Menu is available at maad.co