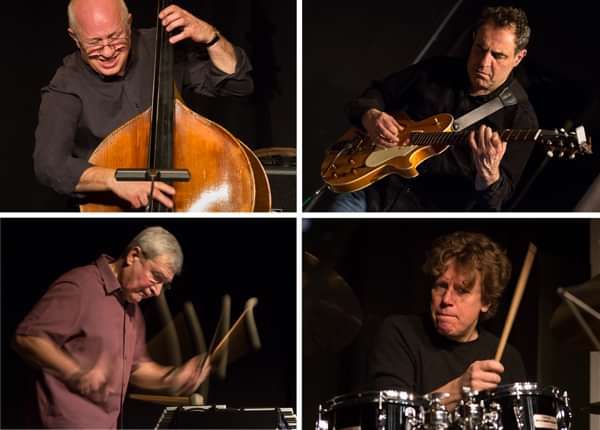 A chance to hear one of the most accomplished British bands spanning two generations - the 1960’s new music era represented by Chris Laurence and Frank Ricotti and the Loose Tubes era of the 1980’s represented by Martin France and John Paricelli. They will be playing music from their second recording released in 2020; tunes that have been honed over the decades and are full of all the good things of life: warmth, humour, melancholy, and memories.

Laurence's group is notable for the acclaim each member has in Britain. In their debut CD ‘New View’ whether it's the clean electric tone of his work on "Falling Grace," the distorted edge of his own buoyant 5/4 "Scrim" or his classical guitar work on Wheeler's melancholy ballad "Where Do We Go From Here?"

John Parricelli is a musical chameleon who paradoxically retains his personality. Like John Parricelli, Frank Ricotti is a player who leans towards spare interpretation, abstract colouration and a lyrical approach to soloing. Laurence is clearly a democratic leader, but what he brings to this band, in addition to an astute choice of band mates and material, is a homage to the great British jazz standards.

Bassist Chris Laurence has been a fixture on the British scene for many years, working regularly in the jazz sphere with artists including reedman John Surman, trumpeter Kenny Wheeler and pianist John Taylor. He’s recorded pop sessions with the likes of Elvis Costello, Sting and David Gilmour, and remains active in the classical community, playing on orchestral film soundtracks including The Constant Gardener and The Man in the Iron Mask.

Please book a ticket in advance, we have limited tickets to allow more social distancing in the venue.