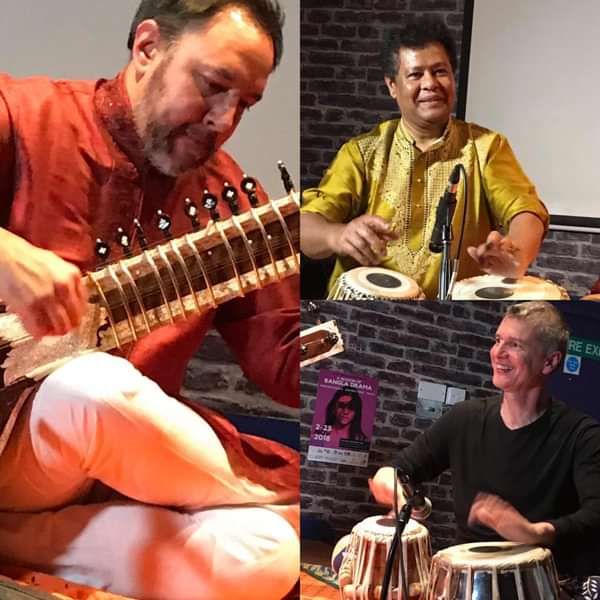 A night of Indian Classical music with a North London twist.

Yousuf Ali Khan, a highly valued and influential core member of the Grand Union Orchestra for 25 years. Born into a famous dynasty of Bengali musicians and a pupil of the renowned master Ali Akhbar Khan, Yousuf began playing tabla at the age of five, later studying in Kolkata. He is now an internationally-acclaimed performer and accompanist of choice for Bangladeshi and Indian musicians visiting the UK.

Jonathan Mayer, son of the late composer and co-founder of Indo-Jazz Fusions John Mayer, began his musical training at an early age and by the age of 16, Jonathan found the instrument that would be his life, the sitar. His teachers have included Clem Alford (the first ever European sitar player), Pandit Subroto Roychowdhury of Senia Gharana and Wajahat Khan (direct descendent of Mia Tansen the great musician, one of the nine jewels in Moghul court of Emperor Akbar). Mayer has performed all over the world including, France, Germany, Russia, United Arab Emirates, Australia, America, Bangladesh, Sri Lanka, and two very successful tours in India (including a performance at The Dover Lane Music Conference) as well as a number of performances for the BBC in the UK.

Playing drums from childhood, Paul Clarvis played jazz and rock while at school and performed with the National Youth Orchestra. After two years at the Royal College of Music he became a full-time musician. He continued playing jazz, but his interests also turned to folk. Clarvis also played classical music, working with the BBC Symphony Orchestra on a performance of Harrison Birtwistle’s, played at the last night of the Proms, and London Sinfonietta.

Please book a ticket in advance. A limited number of seats are available due to current social distancing restrictions.