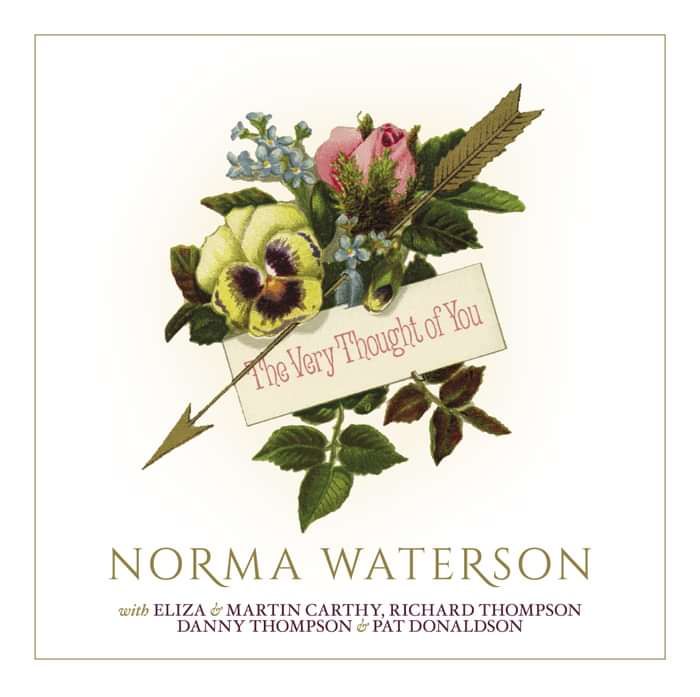 Norma Waterson - The Very Thought of You

On her second solo album the Grande Dame of British folk is presenting us with a surprising, inspired selection of songs. Most of the songs on this album come in pairs, and each has a story attached. Stories referring to Norma's childhood memories or commenting contemporary events, most of them connected to famous personalities in the world of music; people as different and remarkable as Nick Drake, Judy Garland and Freddie Mercury. The mood is quiet yet lit by Norma's powerful and passionately smooth voice, revealing new dimensions to well-known songs. Featuring Richard Thompson, Danny Thompson, Martin Carthy and Eliza Carthy.

The lady herself writes:

With two exceptions the songs are in pairs, and each has a story attached. Those stories range from childhood memories evoked by Fred Astaire of twice a week visits to the cinema with what seems like my entire family set alongside the fantasies indulged by an ordinary man to mask the drudgery of his daily life, to the regret of Al Bowlly's in Heaven for his premature death in an air raid contrasting to the pain of returning from war to the disappointment of peace. They include the feelings of disappointment for the unfulfilled promise of Nick Drake - that most careless (with himself) and most English of writers whose influences came from far and wide but who always makes my Martin think of Ivor Novello. They range from the extraordinary story which is attached to the writing of the song Josef Locke - the naughtiest and most optimistic of Irishmen - a song which comes out of an encounter between the man himself (was it or wasn't it?) and Fairport Convention in a pub in Covent Garden late on night to the white knuckle fury of my sister Lal's Reply to Joe Haines (originally called An Open Letter to Joe Haines) which is just that. A reply to the iniquitous article written by that man on the subject of Freddie Mercury's disclosure that he was HIV positive (indeed that he had full blown AIDS) and which the Daily Mirror saw fit to print.

The exceptions are Dreaming by the great US songwriter Loudon Wainwright III which he let me have in 1997 when I asked if he had any songs going (!) and Fallen Leaves, written for me by Eliza. It's a song triggered by many events, not least the life of Marilyn Monroe, the death of Princess Diana and society's (men's!) notions of what constitutes beauty in women.