Of all the instruments in David Gilmour’s considerable collection, it is an off-the-shelf standard model black Stratocaster that has served him the longest as both a performance and a recording tool, appearing on every Pink Floyd album from 1970 to 1983 and all four of his solo albums to date.

‘The Black Strat’ was integral to the recording of Pink Floyd’s seminal masterpiece The Dark Side Of The Moon (1973), as well as follow-up albums Wish You Were Here (1975), Animals (1977) and The Wall (1979), LPs which form the four cornerstones of the classic-era Pink Floyd. 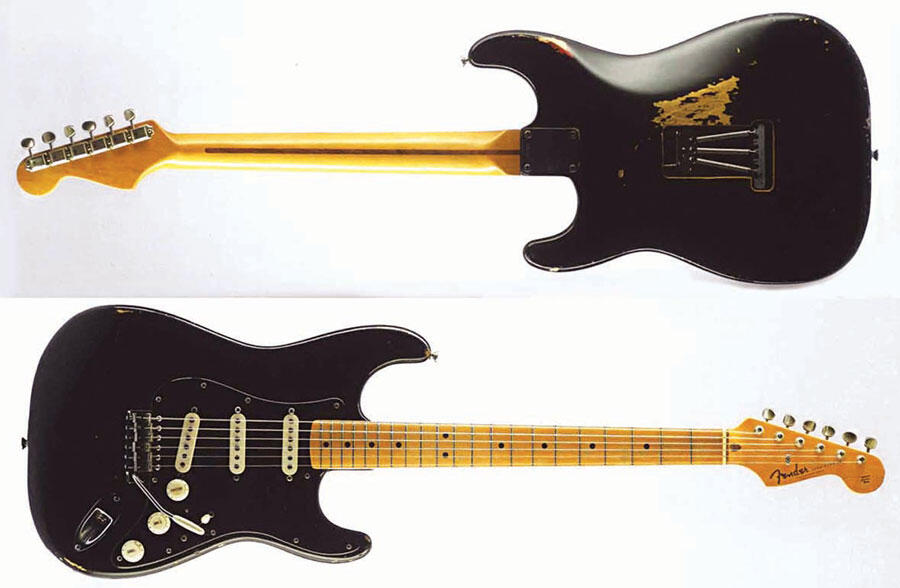 David Gilmour purchased the guitar new in May 1970 from Manny’s, the iconic guitar store on West 48th Street in New York. It was bought to replace a black Stratocaster with a rosewood neck that he had purchased just six weeks earlier but which had been stolen in New Orleans, along with the rest of the band’s equipment, following the second show of Pink Floyd’s third US tour. That first black Stratocaster was never seen again.

With the band forced to end the tour early, Gilmour flew home to London via New York, making an emergency visit to Manhattan’s ‘Music Row’ to purchase another black Stratocaster, this one with a maple neck.

‘It became my main guitar, the one I used pretty much on everything unless there was a reason to want a different sound’ — David Gilmour on The Black Strat

This second black Stratocaster, which would become known as ‘The Black Strat’, bore a serial number dating the guitar to 1969, and a custom black finish sprayed over sunburst. It made its first appearance on stage at the legendary Bath Festival of Blues and Progressive Music at Shepton Mallet, Somerset, during the early hours of Sunday 28 June 1970, where Pink Floyd appeared on the bill alongside Led Zeppelin and Jefferson Airplane.

After a period experimenting with other guitars, including a sunburst Stratocaster, a brown Telecaster and a white Stratocaster, Gilmour had settled on The Black Strat as his favoured instrument by 1971. ‘It became my main guitar,’ Gilmour told Matt Everitt in 2018, ‘the one I used pretty much on everything unless there was a reason to want a different sound.’ 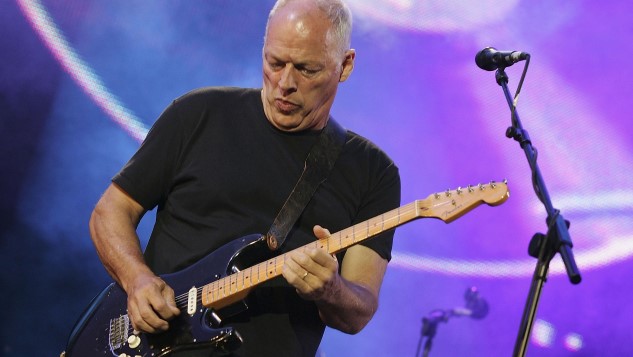 Throughout the 49 years Gilmour has owned this Stratocaster it has been considered his working guitar, used to test new ideas and to experiment with various modifications. It has been fitted with various pickups, switches, inputs, pickguards, tailpieces and tuners, and undergone no fewer than six different neck changes. All these alterations were performed in order to achieve the dynamics in tonal quality and playability required by David Gilmour at the time.

The first appearance of The Black Strat with the rosewood neck was at The Dome in Brighton in June 1972. It was a gig that saw the first complete live performance of The Dark Side Of The Moon, a concept album that explored the stresses and pressures of modern life.

Sporadically recorded at London’s Abbey Road Studios from June 1972 to March 1973, The Dark Side Of The Moon was finally released in March 1973 to critical acclaim and instant chart success. It remained in the Billboard album chart for a record-breaking 741 consecutive weeks and has sold more than 55 million copies worldwide to date.

Gilmour primarily used The Black Strat for his visceral guitar solos, rhythm parts and fills on the album, notably including his astounding solo on Time, and two of the three solos on Money.

The guitar truly earned its moniker when Gilmour replaced the standard white pickguard with a custom-made black pickguard which remains to this day, transforming the appearance of the guitar and creating an instantly recognisable all-Black Strat.

The Black Strat went on to play a key role during the recording of Pink Floyd’s 1975 album Wish You Were Here, a worthy successor to The Dark Side Of The Moon and Gilmour’s favourite Floyd album. It was during rehearsals at London’s Unit Studios that the sublime four-note arpeggio that would inspire the Syd Barrett tribute Shine On You Crazy Diamond popped out of the guitar. Gilmour recorded all electric guitar parts for the album on his trusty Black Strat between January and July 1975 at Abbey Road, laying down the four-note phrase in the cavernous Studio One to capture the effect of a concert hall. 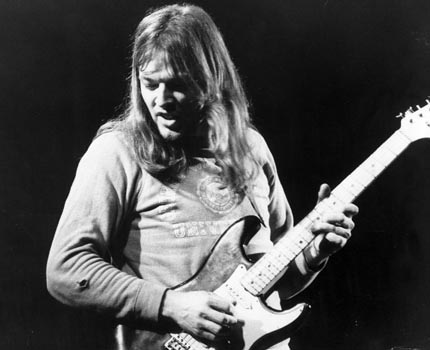 After two short tours of the USA, the band headlined a concert at Knebworth on 5 July 1975 in support of their new material, marking the last time The Dark Side Of The Moon would be played in its entirety by the classic-era Pink Floyd line-up.

Gilmour used The Black Strat to record Pink Floyd’s edgier follow-up album, Animals, at the band’s new recording studio in North London and throughout the subsequent In The Flesh Tour through Europe and North America.

The rosewood neck was swapped out for a custom Charvel birdseye maple neck ahead of recording sessions for Pink Floyd’s next concept album, The Wall, which began in April 1979 at Super Bear Studios in France. It was there that Gilmour laid down the guitar solo for Comfortably Numb, frequently voted one of the best solos of all time. 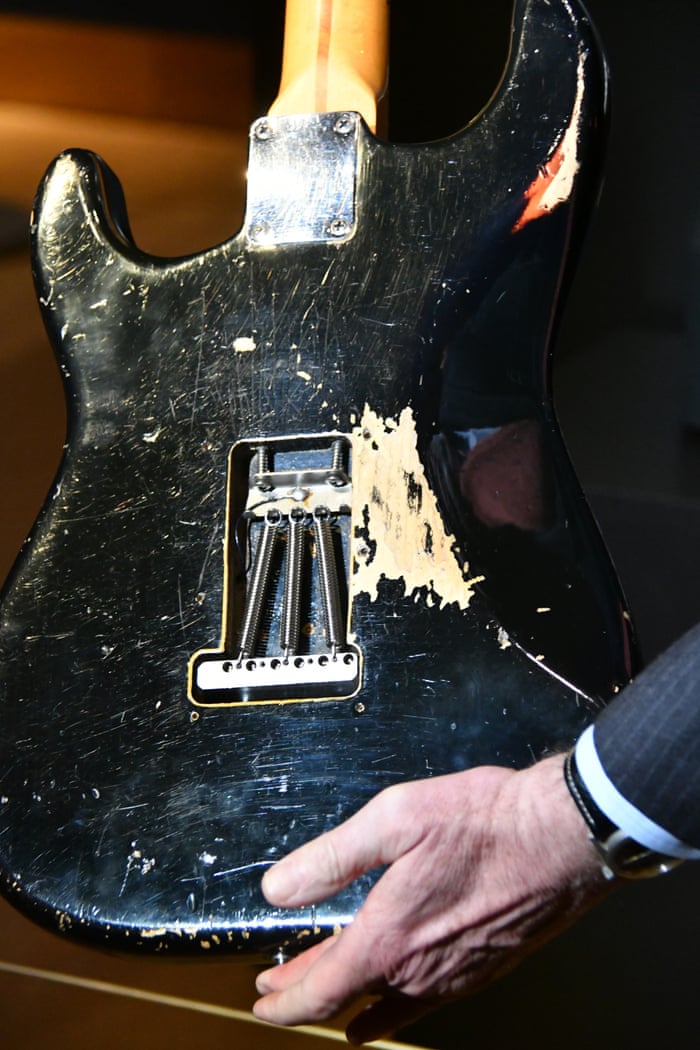 By the time the band kicked off their series of spectacular live shows in support of the album, which featured a giant wall spanning the width of the auditorium, the guitar sported a custom wound Seymour Duncan pickup, which remains on The Black Strat to this day. For performances of Comfortably Numb, Gilmour was dramatically picked out by spotlight, seemingly perched atop the wall as he worked the guitar.

Gilmour recorded the majority of his eponymous 1978 solo debut album on The Black Strat; played the guitar with a custom Charvel 22 fret birdseye maple neck on Pink Floyd’s 1983 album The Final Cut; and re-enlisted the guitar, now modified with a Kahler tremolo system and a shortened tremolo arm, to record his second solo album, About Face, in Paris in August 1983.

In the mid-1980s, Fender brought out its 1957 vintage reissue series, and The Black Strat was laid aside in favour of a Candy Apple Red 57V Stratocaster that would become Gilmour’s principal guitar for the next 20 years. In August 1986, the now unemployed Black Strat was loaned to the Hard Rock Café in return for a charitable donation, and was displayed in its Dallas restaurant for over a decade.

The guitar was returned in poor condition in 1997, lacking its original case, and sent to Chandler Guitars for restoration. It saw little use until 2003, when Gilmour played a few parts from The Dark Side Of The Moon for the Eagle Rock documentary about the making of the album.

The Black Strat made its big-stage comeback, however, when Gilmour, Nick Mason, Richard Wright and Roger Waters reunited the classic-era Pink Floyd line-up at the Live 8 concert in London’s Hyde Park on 2 July 2005, their first performance together in 24 years.

The return to prominence of The Black Strat led to its use on Gilmour’s subsequent solo albums On An Island (2006) and Rattle That Lock (2015), as well as the final Pink Floyd album The Endless River (2014).

Over the years, the guitar has appeared with its owner at countless one-off and benefit performances, sharing the stage with such legendary artists as Jeff Beck, David Bowie, David Crosby and Graham Nash.

In 2006, the Fender Musical Instrument Corporation asked David Gilmour’s permission to produce an accurate replica of The Black Strat. Despite his protestation that ‘it was just an ordinary Strat that I bought at Manny’s’, Gilmour finally gave the go-ahead for a series of prototypes and pickup configurations to be developed, tested and refined over the next two years. Once the fifth and final prototypes had been approved by Gilmour for sound, feel, playability and visual accuracy, the guitar went into production and was released in September 2008.

Thanks for reading Shine On 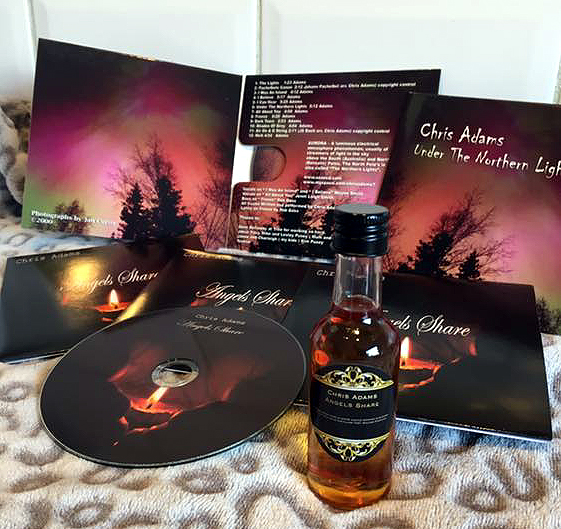 Thats 21 tracks on two cd's of Music that will move you just like Floyd. Get Offer

Use This Link To Get Offer