Chronology and Wish You Were Here

Just 7 days until Chronology hits the digital stores. Hard copies ( cd' ) will also be available from the website from 30th Nov. Why Chronology?

This year I was deeply influenced by David Gilmour's return to Pompeii. Which got me into thinking about time and how we are affected by the parameters of time. David's performance at Pompeii was very special historically as well as musically. It has been 2000 years since an audience attended the amphitheatre in Pompeii, the last time an audience attended the amphitheatre it would have been to watch Gladiators.

At that time Pompeii was a thriving large Roman town where people lived and worked. It was a complex community that had all the modern facilities Rome had to offer. Heated public bathing, restaurants, shops ,markets and of course the amphitheatre.
To think that on one day its was a bustling town with people going about their business then the next day they are all dead under a pile of volcanic ashes.

Chronology Is all about time. I have set the album out like a concept album with recurring themes and melody. Whilst thinking about Time and how we are subject to its 3 dimensional power I created tracks that reflect these thoughts. Beginning, middle and end. Past, present and future. Liquid Solid and gas. The finite way that we are all consciously programmed to think is unavoidable.

The album itself takes one through many emotions as we all think about time, happy memories, sad memories and the hope for a better future.

Wish You Were Here the album by Pink Floyd also really inspired me whilst thinking about time. How the band went into Abbey Road studios just after the success of "Darkside Of The Moon" putting pressure on themselves to come up with a follow on album. They struggled a lot over several months and because of the success of Darkside they were all carrying some guilt about Syd, although it really was not their faults as we all know. The amazing thing is that when the album "Wish You Were Here" was being recorded.. John Leckie was working in studio 2 recording Roy Harper, The Floyd always has a mini bar according to John, John and Roy went into studio 3 where the floyd were recording because they had money now.. Roger was trying to do the vocal on "Have A Cigar", Roger asked Roy to have ago, It suited Roys vocal range better and hence now the vocal on have a cigar is Roy Harper, during this recording Roger stopped and asked who is that pointing at the back, John said "its me John", Roger said "No standing there", John looked around and there was Syd. 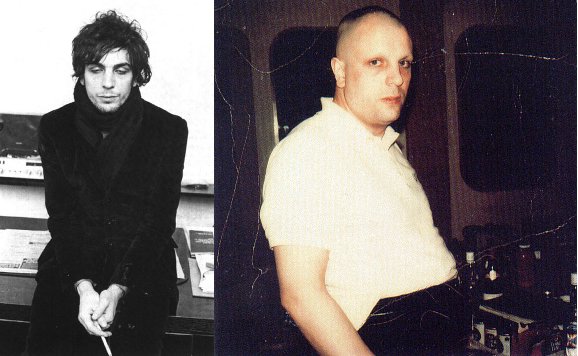 The picture on the right was taken that day in Abbey Road, this was Syd, the band had not seen him for sometime, they could not believe it. David Gilmour and Roger waters both cried.

So the Title track of my Album which really has a deeply sad element to it is my expression of how time and circumstances beyond our control can be devastating. It is also to pay homage to Syd because with out him there would not have been a Pink Floyd and in turn that huge influence in my own music would have been absent.