What sets Tinashe apart from other disposable R&B starlets of the past century is the artistic control she pronounces to have over the wonderfully crafted songs, consistently slick productions and shiny, sexy appeal integral to the work she has delivered throughout her discography. For an artist who has only released one studio album, Tinashe has put her name to a bundle of releases including no less than 5 self-released Mixtapes. The latest, Nightride, offers musically her smoothest collection hitherto though falls short of big-sounding cross over hits. Though that isn’t necessarily a bad thing the Mixtape doesn’t quite match the overall sass and Alt-R&B stylings of her previous output Amethyst or the heights of her earlier work.

It seems Tinashe has somewhat struggled with her identity as an artist. She exhibits a sincere, V Magazine quoted “vixen”-esque, impressive artistry, particularly as the executive producer, writer and video director of her decent Reverie and stronger again Black Water Mixtapes. However, since signing to RCA the inevitable label intervention has stunted her authenticity. After first releasing the incredible and still fresh as ever urban banger 2 On as well as Crunk funker All Hands On Deck, the new releases have failed to scratch the surface of our Tinashe standards. The Chris Brown featuring Player comes off as average in comparison and the sooner Super Love is forgotten the better. At the base of this blog shows a tweet I once sent her at the frustration of a cancelled tour and release setback for the sophomore album Joyride.

From the tracks on this new Mixtape it seems she has listened. Party Favors’ scaling and dirty, bassy synths inflict all sorts of naughty pleasures whilst Ride Of Your Life comfortably marries T’s pop sensibilities with her true grimy, R&B nature. The closest she comes to a hit is with the bouncy, sexy, Tetris splashed head bopper Company. Tinashe appropriately utilises her soft, willowy tone on subtle melody’s which provide a gentle yet sharp touch to the songs and its something she does abundantly well. The way she coos with an effortless breeze in the Sunburn line “I’m seeing pink ‘coz I’ve been looking at the bright sky”, the chorus of Lucid Dreaming and standout track C’est La Vie encapsulates her cool, breezy enigma whilst still retaining a darker edge in the music. Again, Tinashe does like Banks in leaving out one of the better tracks from the listing. An opener that presents oriental infused noises, Comfort You is her most alternative, delphic release with a chorus that strikes an immediate resemblance to her British counterpart FKA twigs. The 3 scattered interludes don’t add anything to the Mixtape although the Binaural Test reminds us of the independent, Bedroom R&B influence of the project, sitting like the unnecessary cherry of the cake.

A sense of coldness runs throughout the songs. It’s definitely a winter listen and if it wasn’t for the sludgy ending and somewhat generic lyrics, Nightride would be a stronger product on the whole. Despite all its niceties, anyone who’s expecting the more alternative, edgy and experimental Tinashe will find a cluster of satisfactory but slightly typical R&B jams. Meanwhile, Luna will be awaiting for the brothers and sisters of Comfort You. 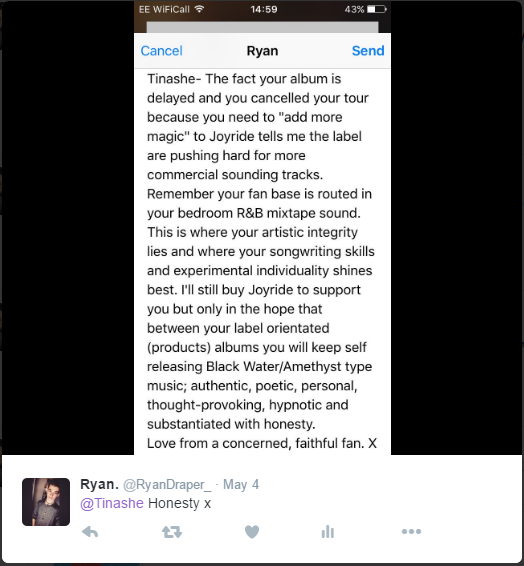