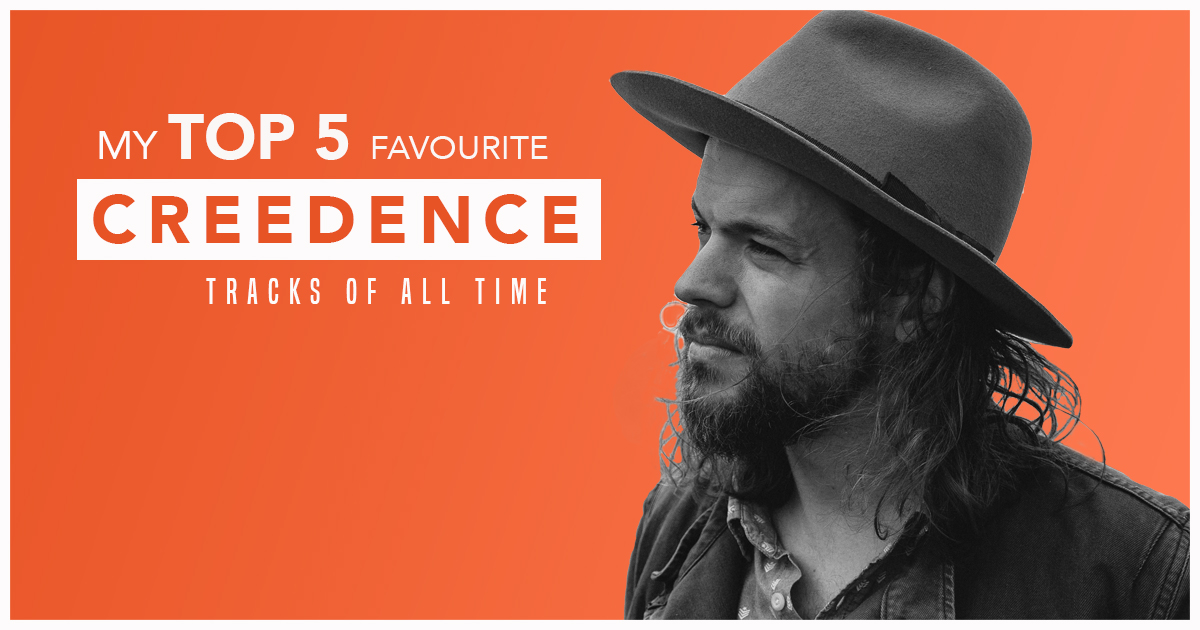 As a man who's done a whole lot of driving in his time as a travelling musician, I'd like to let you in on a little secret I've come to discover during my many hours of venturing from place to place...

Let me tell you, that the greatest 'road trip' music that you will ever hear coming through your car speakers to help you pass the time to your destination, is by far, well and truly, Creedence Clearwater Revival.

Allowing the sounds of Creedence to guide you down the highway will take your boring, painstakingly long, are we there yet? journey, and magically transform it into what feels like the opening or closing scene of a Hollywood blockbuster; instantly making you feel like you're the lead character, cocked back in your seat with your hands up on the wheel as the credits roll across the screen and the camera pans to a wide shot of your car gliding across the countryside.

To celebrate the release of #RequesThis Episode Two (now airing across my Facebook, Instagram and Youtube pages), here's a list of some of my favourite CCR tracks of all time for you to wrap your eyes and ears around.

"Now when I was just a little boy, standin’ to my daddy’s knee
My papa said “Son done let the man get ya an’ do what he done to me”

Talk about a killer opening line!

Delivered with an aggression and resentment, John Fogarty’s vocal commands your attention from the get go. His tremolo drenched lead guitar oozes swamp and takes your mind straight to the murky surrounds of a riverbank whilst the bass, drums and rhythm guitar sit in the pocket with perfection, pushing the song to it’s conclusion. Enter a cowbell preceding the guitar solo at 2:36 and we, my friends, have ourselves a Creedence classic… Cause let’s face it, who doesn’t love a track with cowbell?

2. I Heard it Through the Grapevine

I’ve already spoken of my love for this track in a previous top 5, but it’s so good that I think it deserves another mention. Creedence take this 1968 Marvin Gaye Motown classic and transform it into an 11-minute garage band masterpiece. Doug Clifford on drums powers through the verses beautifully with high hat filled, ‘four on the floor’ groove, before transitioning to rumbling tom drum jungle beats as John rolls out those dark, instantly recognizable, ‘Heard it Through the Grapevine’ licks on the bottom strings of his guitar, echoing the heartbroken nature of the lyrics…

Surely one of the greatest one chord jams of all time, I love this track simply for the somewhat comical fact that Tom Fogarty on rhythm guitarist was designated the job of hitting an E 7th chord on the 2 and the 4 for the absolute entirety of the 7:42 track, whilst the rest of the band got to blissfully jam like crazy around him till their hearts content.

What discipline it must have taken to resist changing up the chord just the slightest, in an effort to make life just a tiny bit more interesting… My hat goes off to you Mr Fogarty.

Listening to this track always makes me wonder about the level of banter that must have gone on in the studio during it’s recording. Tom complaining of his utter boredom whilst the rest of the band pissed their selves in laughter at the entertainment value of his humiliation!

Not one of Creedence’s more prominent numbers, Bootleg is one of my absolute favourites!

Creedence were the kings at producing that classic, thin, sparkling acoustic rhythm guitar sound. You know the one… Where the guitar acts more like percussive instrument as apposed to a melodic one, and the sound of the guitar pick strumming the strings clicks away so close to the front of the mix that you can almost feel it scraping the wax out of your ears..

As I listen to this track, I’m always filled with a deep envy for Creedence’s amazing sense of groove. They really were one of a kind. John’s lead vocal and lead guitar bounce back and fourth of each other like a rubber ball; Fogarty’s overdriven guitar licks responding to almost every vocal line he fires through the microphone, creating 3 minutes of call and response brilliance!

5. Long As I Can See The Light

From what I’ve read, this track was written from the perspective of an American soldier sent to serve his country during the civil war. It was a tradition back then for the families of soldiers to leave a candle by their window whilst their loved one was away at battle, only to be blown out upon their return.

The track opens with a thick electric piano that’s tone makes me drool. The slow groove and dynamic melody in Fogarty’s vocal delivery purveys a message of hope, as line after line he rounds off with a slow, delicate vibrato in his voice.

"Put a candle in the window
Cause I feel I’ve got to move
Though I’m goin, goin
I’ll be coming home soon
Long as I can see the light"

By signing up you agree to receive news and offers from Conscience Records. You can unsubscribe at any time. For more details see the privacy policy.