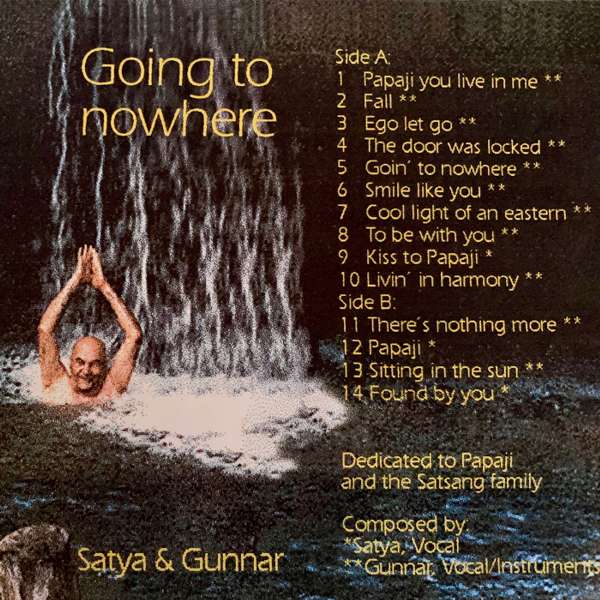 $9.90
Papaji you live in me
Fall
Ego let go
The door was locked
Goin' to nowhere
Smile like you
Cool light of an eastern
To be with you
Kiss to Papaji
Living in harmony
There´s nothing more
Papaji
Sitting in the sun
Found by you

These songs were recorded with Satyaa´s friend Gunnar in Ribe, Denmark in 1995. Both knew each other from their long stays in Lucknow at Papaji´s Sangha. They often sang to Papaji together and when Satyaa came back to Europe after her 5 years stay with Papaji, Gunnar invited her to reccord his songs with him. These songs are love ballads to Papaji, to the Self. Satyaa contributed 3 of her own songs on the album.

singing jam session in my flat in Lucknow on forest road. With my friends Gunnar, Mahima...

In Lucknow she met Pari, to whom she jklö was married by Papaji in 1995. After Papaji died she recorded some of his favorite Bhajans along with some own compositions and this became their first album “Garden Of Peace” – many more were to follow. As both of them shared a deep love for music and devotional songs, they kept singing and composing spiritual songs together, which they have been doing ever since and have recorded more than 14 Mantra-CDs.