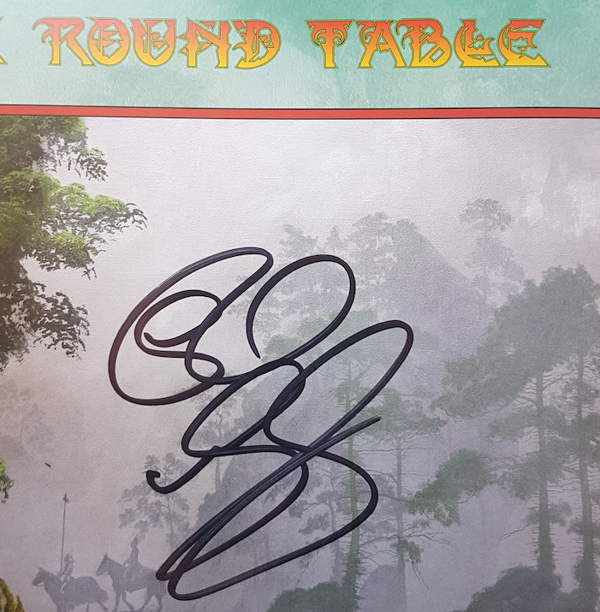 Outstanding! It's a superb record, as the 75's original record, and the arrangements of keyboards are really good (very clear sound), a little bit different from the original, but also very good. The Chamber Choir is great! Although I'd prefer Ashley Holt singing all songs (he is still an incredible singer), the new female singer is great too. Rick is like a fine wine, getting better as the years go by. Thanks Rick for all good music you've given us, it's really a God's gift. Long live to our true born king, Rick Wakeman!

It's no use comparing this one with the 1975 edition. The recording is superior, and the additions musically refer to the 2012 "Journey" due to Haley Sanderson. There's even a hint of 1984. I loved the original Ashley Holt vocals more than his new renditions. But still his contribution to the album is vital. We all know the story of Rick's heart problems during the writing of the original songs. On this version there's more sparks and the album sounds less dark and moody. The new Arthur is a worthy follow up to the new Journey and the new Wives. Has Wakey's career come full circle with this one or is there more to come???

The new Arthur sounds phenomenal! It was mixed and mastered even more dynamically than Journey. The dynamics might actually frighten people who are used to the current era's heavily squashed rock albums. Rick's keyboards are ear candy. I love the dramatic palm glides on the Hammond organ, the funky Wurlitzer piano riff in Holy Grail, the rich grand piano, and all the killer Mini-Moog sounds. I think the second Mini-Moog solo in Merlin is the best solo Rick has ever recorded. Tony Fernandez and Dave Colquhoun really shine on this record as well. Percival is my favorite new track on Arthur. It's one of the most rocking tunes Rick has written. Percival has great Mini-Moog parts, some killer guitar playing, rhythmic complexity, shifting meters, and the ultimate bombastic ending. This is prog at its best.

Rick Wakeman's crowning achievement (yes; pun intended). I have always loved The Myths and Legends of King Arthur and the Knights of the Round Table; but, have felt disappointed when I would consider what it could have been. The themes are so strong, musically and lyrically, and, given the vast subject, it could have been something offered on a grand scale... a double album prog epic masterpiece! Plus, with Wakeman's association with Yes, and Roger Dean, where was the cover art it SHOULD have been given? Well, here it is! All of it! It's like Rick Wakeman read my mind! Normally, I would cringe at the idea of rerecording a classic; but, in this case, it wasn't just rerecorded... it was finally completed and fully realized... and what an epic it is! Before we even put the discs on the player, we are captured and drawn in by some of Dean's finest work! Then there is the sound quality: a vast improvement over the original! The performances are just as good or even better than 1975! Every one, including Ashley Holt and Rick, himself, (with his blazing classic analog synth and his Steinway piano) are in top form in this new recording! Hayley Sanderson, who sings the newer compositions, does so just beautifully; and the newer pieces are generally calmer than the original songs, providing a welcomed contrast... and, as you would expect, the newer melodies are gorgeous and the lyrics are every bit as high quality as the older material. By the end, you don't even feel as if you sat for almost 90 minutes! In fact, you will likely just want to listen to it all over again. This album is finally the classic prog epic masterpiece I always knew it could be, and I just want to say God bless Rick Wakeman and Roger Dean for making it so!