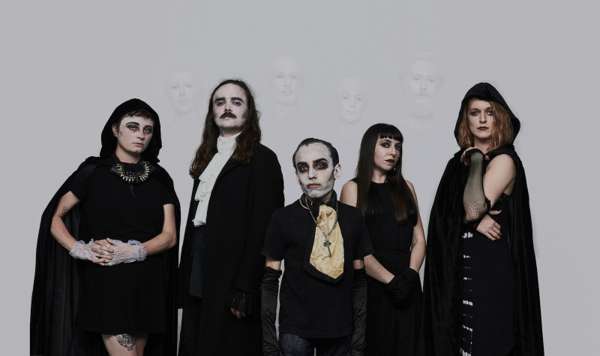 Born out of the swampy humidity of Baton Rouge, Louisiana, stoner/sludge metal band Thou are as massive as they are prolific. Thou's sound blends the shuddering heaviness of doom with the oppressive atmospherics of black metal, giving the band a monolithic sound that feels, at times, inescapable. Thou have maintained a strictly D.I.Y. philosophy, booking their own tours and making their music available for free download. Establishing their sound with releases such as 2008's Peasant, they took more risks on subsequent albums like 2010's Summit and 2014's Heathen. They also toured and recorded with kindred spirits the Body, producing Released from Love (2014) and You, Whom I Have Always Hated (2015). The group explored several of their influences on three 2018 EPs, then incorporated them all into their fifth full-length, Magus.

Thou were formed in 2005 by guitarists Andy Gibbs and Matthew Thudium, bassist Mitch Wells, and drummer Terry Gulino. Following the arrival of vocalist Bryan Funck in 2007, Thou released their first full-length effort, Tyrant. The next year would see the band release a follow-up, Peasant, as well as a string of splits and the EPs Malfeasance Retribution, To Carry a Stone, and The Retaliation of the Immutable Force of Nature. Following a pair of EPs, 2009's Through the Empires of the Eternal Void and 2010's Baton Rouge/You Have Much to Answer For, the group's more experimental third full-length, Summit, arrived in 2010. During the year, drummer Gulino was replaced by Josh Nee. Three EPs, The Archer and the Owle, Big City, and To the Chaos Wizard Youth, followed in 2011.

After a slow period that saw the band release only a pair of splits, Thou returned with their fourth full-length album, the epic and heavy Heathen, in 2014. This was the group's first album to incorporate cleanly sung vocals, as well as acoustic guitars. Shortly after, Thou released Ceremonies of Humiliation, a triple-LP compilation of tracks from their split releases (an expanded double-CD edition followed). That same year, Thou released a collaborative EP made with like-minded doom duo the Body titled Released from Love, which was released in a limited edition on the Vinyl Rites label. The collaborative effort was repackaged early the next year along with another batch of songs the bands developed together, released by Thrill Jockey as You, Whom I Have Always Hated/Released from Love.

Following three years of silence, Thou returned in 2018 with drummer Tyler Coburn replacing Nee, and a bounty of material spread across several different releases. The band paid tribute to Nirvana on I Have Become Your Pupil, a split LP with the HIRS Collective. In advance of their fifth full-length, the band released three EPs focusing on a certain style. The House Primordial showcased the group's noise/drone side, while Inconsolable was a venture into stark, acoustic folk songs, and Rhea Sylvia explored their grunge influences. All of these EPs were compiled as Ceremonies of Consolidation. Finally, the full-length Magus combined all of these elements. Soon afterward, Thou and Ragana released Let Our Names Be Forgotten, a split EP dedicated to the victims of the 2016 fire at Oakland warehouse Ghost Ship. ~ Gregory Heaney & Paul Simpson, Rovi