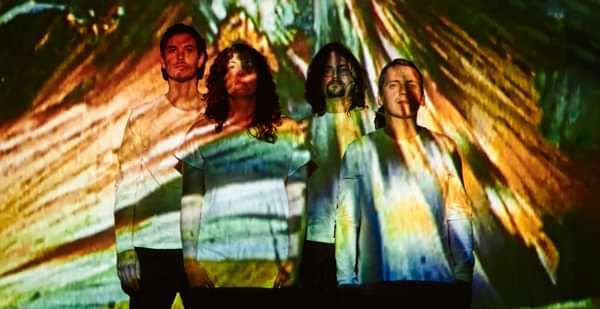 POSTPONED
Entry Requirements: Over 18s only / standing only

The third studio LP from kosmische folk-rock four-piece Modern Studies opens with a photograph, and closes with a shape of light, and in between what slowly develops is a heady, heartening album that charts love, loss and life. There are echoes of Rebecca Solnit, Talking Heads and gardening tools, as the Glasgow-via-Lancashire group reflect on landscape, the elements, intimacy, distance, sunsets, moonlight, and the blues.

“I found that phrase, ‘The Blue of Distance’, through Rebecca Solnit,” says St John, who lives in Lancashire’s Forest of Bowland. “She writes, ‘The world is blue at its edges and in its depths. This blue is the light that got lost’. I wrote at home with my little girl asleep upstairs, the windows open, the summer sun setting over the fells, the light shifting.”

Those ever-shifting shades and shadows permeate The Weight of the Sun: its hues of the sky and the ocean; of heartache and arteries; of absence and of everything. Blue is light-years away, and it’s painfully close, not least on the aching, ‘Northern Sky’-invoking gospel of ‘Shape of Light’ (“blue-blood tributaries just below the skin”). There are traces, bruises, wakes.

Welcome Strangers gently revelled under a ‘Young Sun’, but there’s a sense that the heavens are heavier this time around. Is The Weight of the Sun a meditation on time, on life, passing? Glasgow-based Scott acquiesces. “A lot of life was lived in the last two years,” she says. “Perhaps we’re showing a rawer, truer connection to things. I feel, and hope, when listening, that the overriding sense is joyful, though.” That sentiment strikes a chord with St John. “This is an attempt to weave something hopeful from it all.”

And so they do. The Weight of the Sun is uplifting, enlightening, and — on various occasions — eminently danceable. Smillie’s galloping percussion conjures a primal rodeo hoe-down on ‘Spaces’; there’s an insatiable bass groove on ‘Brother’ (“the ear finds what the eye avoids”); and even a hip-swaying high-noon undertow amid the dizzying psych-folk of ‘Photograph.’ It might well be heavy, it might well go down, there might well be darkness, but the sun also rises.

Scott and St John first met through Edinburgh’s thriving DIY music community 15 years ago, and while theirs is a long-distance musical relationship these days, there’s an uncanny proximity, too. Witness Scott’s “spool of light and the thread of a wake” on salutary track ‘Photograph’, and St John’s kindred “unspooling time” on album closer, ‘Shape of Light’; or their mutual earth(l)y idiom. “I think we both write about the world around us,” offers Scott, and St John agrees. “Emily lives in the middle of the city, I live in the middle of nowhere; and yet there’s often a strange resonance between what we write.”

There is a strange familiarity, and a welcome strangeness, in the music and quiet alchemy of Modern Studies. On album three, they are at once star-struck and down to earth — quite literally, on the latter front, as Harvey notes. The band, he says, delighted in seeking and appropriating “everything we could that would clang: garden implements, including rakes, shovels and hoes; fire extinguishers; and a pristine fire pit which made haunting bowed shimmers before being relegated to the garden.” Creative offspring were enlisted too, and his six-year-old daughter, also called Emily, contributed some exceptional improvised violin parts to ‘Run for Cover’.

Harvey’s bandmates recollect the recording process with similar fondness. “I loved when Pete made the bird sound at the end of Rob’s ‘Heavy Water’ on a frantically scraped violin very late one night,” Scott reminisces. “There were a few post-recording playful improv sessions like that, where a magical accidental sound would occur and the character was so unique that it informed the whole sound. I think this is something we all share: a deep curiosity for sound. My favourite bit about recording is that lucid moment of exploring instruments you have absolutely no business playing.”

“Emily’s xaphoon playing!” raves St John, à propos his personal highlights from working on The Weight of the Sun. “Joe and Emily’s abilities to find surprising and beautiful vocal harmonies were always a treat to hear too, as were Joe’s drum and mellotron parts, mostly done in the Green Room at the Glad Cafe,” he says of Smillie’s grassroots arts haven in Glasgow. The quartet’s downtime also yielded fertile fruit, thanks to a classic live film by Talking Heads. “I showed Pete Stop Making Sense for the first time — how had he not seen it? — and he wrote the bassline to ‘Brother’, and a string of others, soon afterwards.”