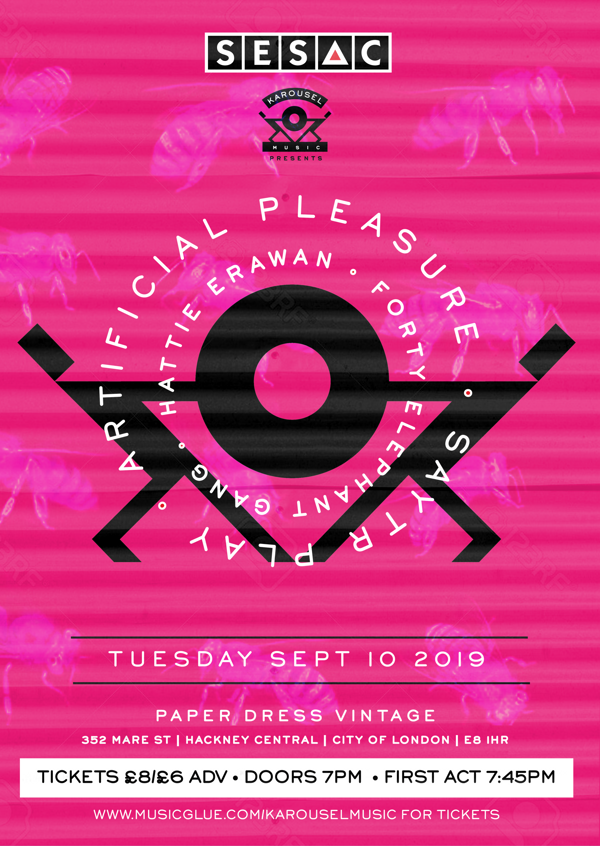 Welcome to the friendliest showcase in town! Come and discover the cream of breaking talent with Industry CIC Karousel Music and US Performing Rights giants SESAC.

Since their formation in 2016, London-based quartet Artificial Pleasure have been a unique voice on the British music scene. Their expansive sound combines rock, electronica and new wave with angular post- punk guitars, tight rhythmic grooves and flourishes of disco-tinged energy.

Last year saw the release of their critically acclaimed debut album ‘The Bitter End’ which drew praise and 4- star reviews from the NME, The Independent and The Line of Best Fit in the UK. Spain’s Mondo Sonoro and Italy’s TomTomRock scored the album 8/10. Elsewhere the band have been Alexis Petridis' track of the week in Guardian, featured in Interview Magazine and were one of NME's bands to watch prior to releasing their debut.

In support of the album the band played festivals slots at The Great Escape, Dot-to-Dot, Liverpool Sound City, Live At Leeds, Secret Garden Party and Standon Calling as well as touring the UK. They have also toured further afield in Germany, Poland, Austria and Spain with a festival appearance at Soundrive in Gdansk and shows in Berlin, Munich, Vienna and Barcelona.

Radio plays have come from Lauren Laverne & Huw Stephens at 6Music, John Kennedy at XFM and Edith Bowman on Virgin in the UK, while abroad support has come from Zane Lowe at Beats, Flux FM in Berlin and Austria’s FM4 with tastemakers CD102.5 in Ohio, KEXP in Seattle and Reactor 105 in Mexico City also playing the band regularly. The band’s debut single I'll Make It Worth Your While appeared on YouTube’s The Needle Drop and Spotify’s New Indie Mix and currently at 440,000 streams, with the band notching up close to 900,00 Spotify streams to date.

Artificial Pleasure is entirely independent in their recording process with synth player Dom Brennan handling production and mixing duties. This DIY ethic has yielded some unconventional production techniques with field recordings and elements of songwriter Phil McDonnell’s eight-track demos often incorporated in the final productions. Early 2019 saw the band return to the studio to work on a follow up to their debut album with the results of the new sessions set for release in the coming months. The first of the new tracks ‘A Journey Across Town’ brims with intensity and confidence in their artistic direction. An imagined journey across London, Berlin, Tokyo, Seoul, the urban mess and sprawl of modern life - it is at once direct, cathartic and joyous.

Artificial Pleasure’s engaging live show which features vocalist McDonnell’s theatrical in-your-face persona which one critic compared to a mix of Bryan Ferry and Sid Vicious. Their visual presentation is also evident in their videos, which meld black humour, surrealism and body horror. ‘Wound-Up Tight’ for example depicts McDonnell being bombarded by an arsenal of everyday objects while being suspended upside down. He draws parallels with performance artists such as Marina Abramović and Ragnar Kjartansson. “They’re people who put themselves at the centre of the work. It was hideously painful to do, but artistically it’s me putting myself on the line...” 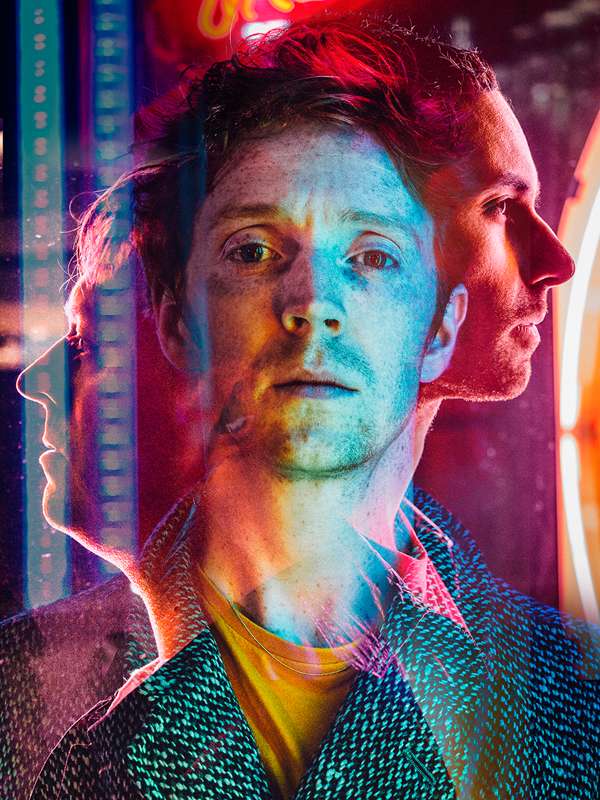 “It’s impossible to bottle lightening, Saytr Play come pretty bloody close” *– *Louder Than War ** Led by wild and captivating front-man Fred Farrell, “ Saytr Play have a burgeoning reputation for delivering a live show that’ll leave your jaw on the floor, ears begging for more” (This Feeling, Gigslutz). Saytr Play have been compared to bands such as The Strokes, Catfish & The Bottlemen, The Vaccines, Cage The Elephant, Iggy Pop and Vampire Weekend. 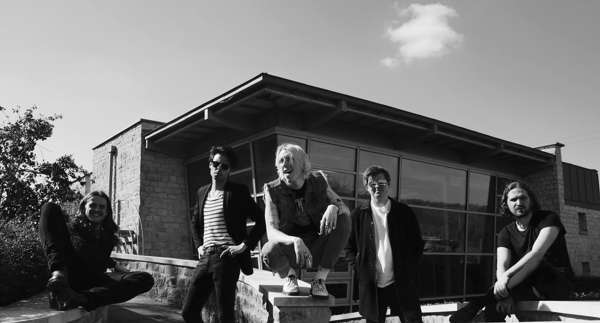 “Next Time Around is a definite evolution in sound however, fulfilling the promise of the earlier release and then some. This is a captivating debut album full of charm that will delight and enchant anew with every listen” -** Adam Jenkins, Fatea **

“With a wild west sound straight out of East London, Forty Elephant Gang have picked up the baton passed round the capital from hands of Mumford and Sons via a slew of heartbroken, bearded, poets in backrooms and bars.” -** Scott Edgar, Folk & Tumble **

“This is a very impressive release from the four piece who’ve managed to bring traditional sounds of folk and bluegrass to the fore and build on them bringing them to a wider audience. That is an impressive feat and challenge in itself but it has really paid off especially when the band have released music as good as this.” - Charlotte Pearson, Mixtape Couture

Forty Elephant Gang are a rousing and innovative acoustic three piece from East London. Their songs relay tales of heartbreak, misdeeds and revelry, presented with rich harmonies on a textural musical canvas. Blending genres such as Folk, Americana and Blues with classic British song writing. Having performed at several festivals including headlining Home Farm festival in Dorset, Strawberry Fields in Cambridge and the Ramsbottom festival amongst others. The band have recently finished recording their debut album ‘Next Time Round’ which is due for release imminently, with previews already being reviewed favourably by Americana UK and Fatea. With the bar set high Forty Elephant Gang are looking to take the album out on the road and airwaves... let the stampede begin! 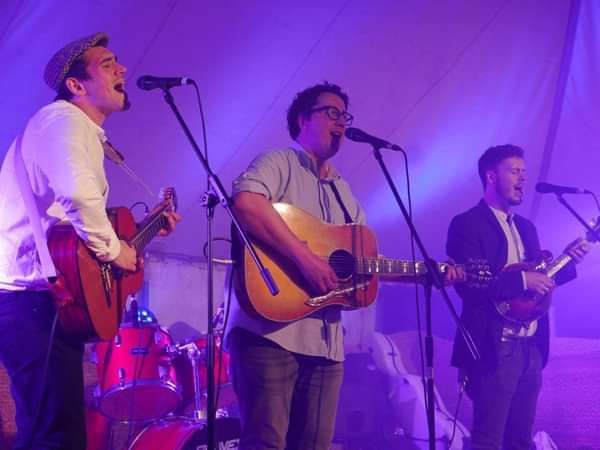 Hattie is a haunting alternative/folk artist who writes and performs truly original material. Her music is a mix of powerful, radiant vocals with dark beautiful lyrics joined in unison with deep grunge rooted guitar riffs. Her key influences are Joni Mitchell, Nirvana and Sheila Chandra.

When combined with her band they become Hattie Erawan - a forceful outfit consisting of Drums, Bass, Guitar, Saxophone, Recorders and backing vocals 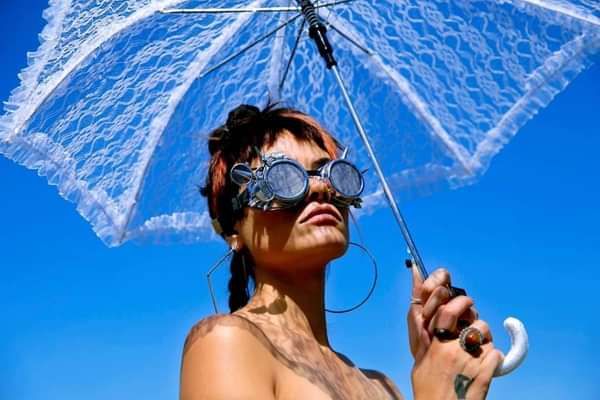