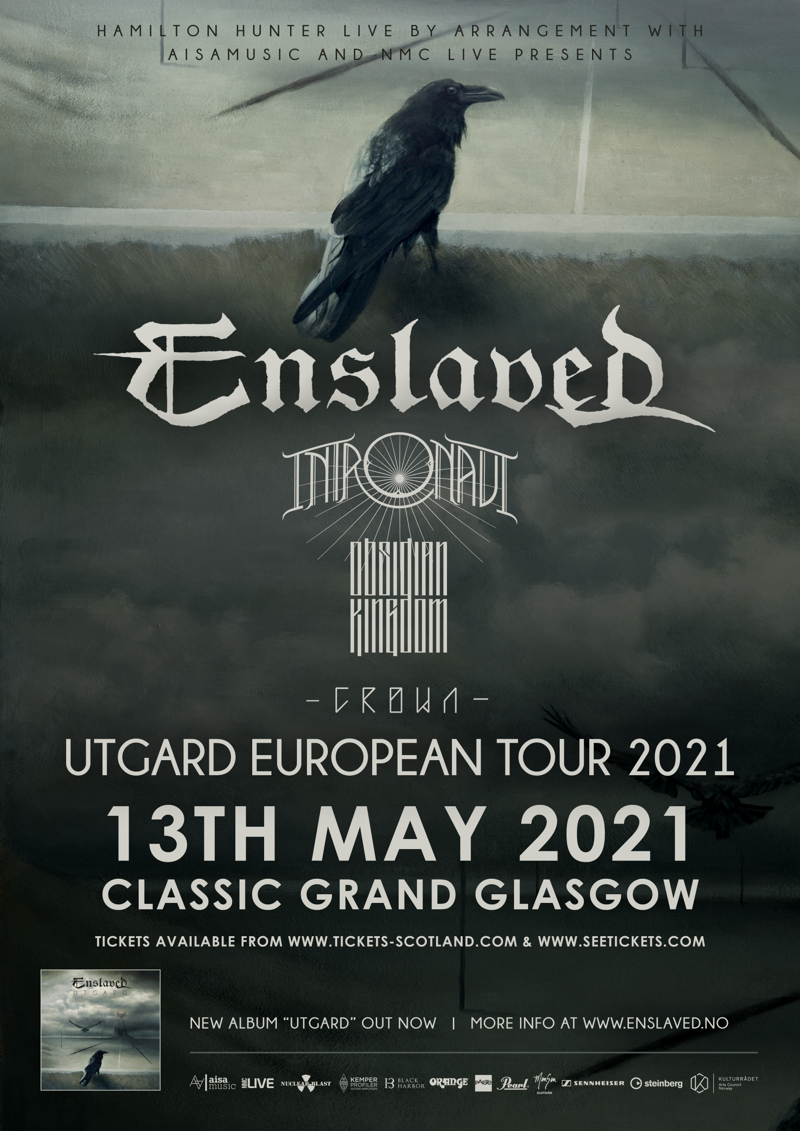 Even in the most primeval stages of their storied career, ENSLAVED was so much more than just music. Born on the outskirts of the infamous upheaval of teenage arsonists more commonly associated with a genre called Norwegian Black Metal, the Bergen based Vikings shared the inspiration and production ideals – yet steered clear of the non-musical dramas that have overshadowed so much of the artistic value from this movement. Shaking the very foundations of the young scene as early as 1993 with their iconic split release alongside fellow black wizards EMPEROR, they positively invented the term and art form Viking Metal with their icy monuments “Vikingligr Veldi” and, of course, the immortal splendor that is “Frost” and “Eld”.

Never a sucker for stagnation, ENSLAVED explored uncharted progressive and psychedelic territories even back in the “grim nineties” – placing them in a unique position of both bearers of tradition as well as explorers into the unknown. Now, almost 30 years after changing the name of their adolescent death metal combo PHOBIA and advancing towards a more frostbitten and pagan black metal dirge, ENSLAVED has become a worldwide phenomenon, enthralling their listeners with music at once grim and sublime, effortlessly proving that it is indeed not a problem at all to sound like the sophisticated love child of KING CRIMSON and BATHORY.

With the nucleus of the band still and forever consisting of childhood companions Ivar Bjørnson (guitars) and Grutle Kjellson (vocals), ENSLAVED have perennially and carefully reinvented, refined and progressed their highly inventive brand of extreme metal to a wholly unique level, fluently combining blistering black metal with warm prog rock and archaic folklore with psychedelic thrall. “E”, their fourteenth album, released back in 2017, proved their worth by bringing a certain metaphysical plane to their very own interpretation of Nordic mythology, runes and the sacredness in profanity. “The album cycle for ‘E’ was the most intense we did so far,” an enthusiastic Bjørnson exclaims. “We covered more territory than ever before and gladly realized we got noticed more outside the extreme metal scene.” It was a thrilling but weird time, he recalls, when one day they were playing their groundbreaking “Frost” in its entirety only to churn out their more psychedelic, soothing tunes the next day at a prog festival. Only now it becomes apparent that this was only the beginning of yet another journey.

Enter “Utgard”. Enter a record brimful with northern magic. Let all those other bands sing about Thor’s mighty hammer and poor Odin hanging from that tree in miserable weather conditions. ENSLAVED are looking behind the mirror, tracing the origins of the well-known fables of the northern world back into each and every one of us. “Utgard can be countless things,” Grutle Kjellson states. “An image, a metaphor, an esoteric location. From Norse mythology we know it as a landscape where the giants dwell, where the gods of Asgard have no control. On a psychological level it can represent the spheres of sleep, dreams or lucid dreams; the outer borders of your own consciousness and what lies beyond them in the subconsciousness. Utgard represents something that is hard to master completely, perhaps impossible. This something it dangerous, chaotic, uncontrollable. Yet there is something enchanting about a place like this. It is where madness, creativity, humor and chaos dwell.”

Their new album is a journey into and through scary Utgard. Sounds dark? You betcha! “Utgard” shows ENSLAVED both unleashed and thought-through, a lethal combination unfurling a potential that’s easily rekindling the furor of their early works while dancing gracefully through their most ambitious, most haunting and most musical tunes yet. A contradiction? Life itself is a contradiction. And yet we all live to prove it wrong. “Utgard can be a very scary place, but that’s exactly what this album is about,” Grutle says. “Conquering fear and living with the beings found in this place.”

Work on “Utgard” commenced in the dying weeks of 2018, fueled by a sudden onslaught of the northern muses. “I sat down in my living room with my acoustic guitar and suddenly it happened all at once”, an almost bewildered Bjørnson remembers. “I couldn’t believe it at first, it was like all the noise in the world had followed me home. After only two nights in my living room already the first songs had taken shape. That was amazing but at the same time, I almost didn’t trust myself because it happened so fast. I took a break before I went back to it but again, it all happened pretty fast. And as soon as I took the songs to Grutle, things really took up.”

After being friends for more than three decades, things between them happen naturally. “Friendship is what makes this band so strong”, Bjørnson nods. “We both are loyal to the idea and stick to our vision, come what may.” In a way, that’s true for the rest of the gang as well. The solid base of guitar pro Arve “Ice Dale” Isdal since 2002 and Håkon Vinjeas keyboardist and remarkable clean vocalist, the arrival of new drumming talent extraordinaire, their former co-producer and mate Iver Sandøy, really spiced things up. “2019 went by in a creative blur, and that’s also thanks to Iver,” Bjørnson stresses. “We’re in a really good place right now.” His brother-in-arms Grutle adds with a grin: “Plus, Håkon’s the only guy in the world who actually wanted to become a keyboard player instead of guitarist or vocalist. That alone is pretty remarkable.”

ENSLAVED in 2020 is a band in stellar form, a band at its most existentialist and self-conscious, proud Bergeners bearing the torch of their hometowns’ extraordinary musical history. “Utgard” shows them at a stage where simply everything they touch turns to gold. Icy black metal anthems walk hand in hand with refined prog rock gems and primordial, dark folk sorcery. It’s ENSLAVED to the bone. And yet again a band that cast off its old skin, delivering some of their shortest songs in years while still packing them with glimmering detail. Bjørnson nods his head reverentially. “Creating this album was truly special. We almost felt we were in Utgard all the time, we were so invested in this concept. Plus, we got a lot of help from the weather gods. We started recording in October 2019 and were finished with mastering on the morning of Christmas eve – or Grutle’s eve, given that this is his birthday. In that whole period, I don’t think I experienced more than five minutes of bright light outside.” Even while mixing this sublime effort with Jens Bogren in his Fascination Street Studios in Sweden, they found themselves in a snowstorm raging through the Swedish woods. Still, fun was had, as Grutle puts it: “Everybody was pulling into the same direction and really wanted to achieve something great here. I think we never had better recording sessions!”

The unusually rollicking rock’n’roll touch of ‘Urjotun’ or the archaic voice from the deep that is ‘Utgardr’, the raging force of ‘Flight Of Thought And Memory’ or the elegiac final curtain ‘Distant Seasons’ show ENSLAVED more open, more focused and simply more brilliant than ever. Also to Bjørnson, “Utgard” is truly special. “We have albums that are steps and we have some that are milestones,” he says and Grutle nods in agreement. “I personally think ‘Utgard’ is a milestone along the lines of “Frost” or “Below The Lights”.” Time will tell, of course, but hearing a 42 year old veteran of the Norwegian metal scene talk that fondly and enthused about his 15th studio record is restoring a lot of faith in the concept of long-running bands. Maybe that’s why even after 30 years, ENSLAVED still refuse to lower their standards. Quite the contrary, in fact: They always find new ways to surpass themselves by looking back at their career. “During the recordings I had to think of the time when we went to the studio with only 25,000 Norwegian kroner to record “Frost”,” Bjørnson fondly remembers. “We had like five days to record it all. And we did it. Maybe I needed that reminder think too much and just play the best you can.” Boy, it sure helped!

By signing up you agree to receive news and offers from Hamilton Hunter Live. You can unsubscribe at any time. For more details see the privacy policy.