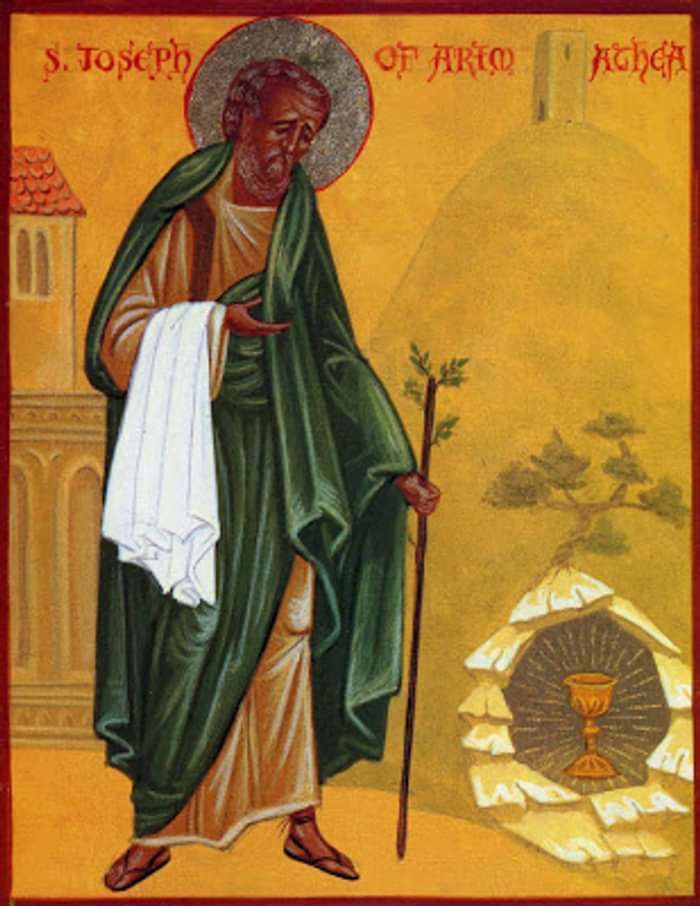 Pay what you want ($0.38 minimum)
bleah and bub again again_Source_Master.mp3

(By ‘Elijah Luce’, Spring 2011) The Arimatheans take their name from St Joseph of Arimathea, a member of the Jewish Sanhedrin and a secret and wealthy disciple of Jesus, who according to the book of Matthew 27:57-60, asked Pontius Pilate for permission to take Jesus' dead body in order to prepare it for burial. He also provided the tomb where the crucified Lord was laid until his Resurrection. Joseph is also mentioned a few times in parallel passages in Mark, Luke and John, but nothing further is heard about his later activities.

So why, you may ask, should our society wish to associate ourselves with St Joseph in particular? Well, beyond the Gospel accounts various apocryphal writings and traditions associate Joseph of Arimathea closely with Britain, notably with the bringing of ‘the Grail’ to this land. Unfortunately traditions are divergent as to what exactly the grail was; it may have been the cup used at the Last Supper, the dish in which Joseph caught the blood of Christ on the cross, the Christian faith itself, or maybe even the young Jesus. In more ancient beliefs the Grail has been seen as a stone or a serving dish from which comes plenty, or as a cauldron from which comes re-birth and even resurrection. Throughout British history however, the Grail has been a potent symbol of hope, a symbol of a great Good that men have strived to attain in the face of worldly vanities and tribulation.

Welsh and Cornish traditions have long associated Joseph of Arimathea with the trade in tin, suggesting that as well as being a member of the Sanhedrin, Joseph was a wealthy merchant connected with the Phoenician trade with Britain. Cornwall was a chief mining district and was well-known in the Roman empire for its tin. Somerset was renowned for its high quality lead and of course Welsh gold was and still is highly prized. Joseph may have been related to Jesus (as bodies of executed felons were usually released to their families). According to the Talmud he was Uncle to the Virgin Mary being the younger brother of her father, and legend has it that he brought his young relation with him on one of his trading visits to the west of Britain. William Blake’s poem/hymn ‘Jerusalem’ is based upon this legend and contains the line:

“And did those feet, in ancient time, Walk upon England’s mountains green…”

After the death of Jesus it was supposed that the fury of the Jewish authorities turned upon many of his supporters, prominent amongst which would have been Joseph, one of their own who by his actions in claiming Christ’s body would have been particularly scorned. It is further suggested in certain apocryphal writings that he went into exile, along with other prominent Jewish supporters of Christ, such as Lazarus, Mary (Magdalene?) and Martha, his son Josephus and brother in law Hebron (also called Bron, who in later writings is associated with the ‘Fisher King’, the wounded guardian of the Grail). They accompanied the Apostle Philip on his evangelising mission to Gaul, where they were based in Marseilles where Lazarus and Mary remained while the others travelled north (the Church of Lyons still maintains the tradition that Lazarus became the first bishop of Marseilles). At the English Channel, St. Philip sent Joseph, with twelve disciples, to establish Christianity in the most far-flung corner of the Roman Empire: the Island of Britain. The year AD 37 is sometimes given for this "event", with AD 63 being put forth as an alternative, however the earlier date does seem too early and the later date is sometimes given as the date of Joseph’s death.

Other traditions have Joseph being given the cup of the last supper (possibly by Pilate), which sustained him during a forty-year imprisonment, during which the risen Christ revealed to him the mystery of the Grail. On being released by Vespasian he set off on his above journey with his followers, however this would make neither of the above dates plausible so the tradition of a forty-year imprisonment is usually dismissed.

It seems reasonable that if Joseph did have prior knowledge of Britain that he should have been chosen by Philip to evangelise in his old trading ground of western Britain. Local legend has it that Joseph sailed around Land's End with his disciples and headed for his old lead mining haunts which brought him to Glastonbury. Here his boat ran ashore in the Glastonbury Marshes and, together with his followers, he climbed a nearby hill to survey the surrounding land. Having brought with him a staff grown from Christ's Holy Crown of Thorns, he thrust it into the ground and announced that he and his twelve companions were "Weary All". The thorn staff immediately took miraculous root, and for nearly two thousand years a thorn tree has stood on this site on Wearyall Hill, which was descended from St. Joseph’s original staff. (Symptomatic of this age’s spiritual degradation this thorn tree was destroyed by vandals in 2010.)

A Druidic cor allowed them to settle at a Celtic holy place called Ynys Avalon or Ynys Witrin, both of which have been associated with Glastonbury. King Arviragus eventually gave them twelve hides of land where they had settled and where they built the first church, which was dedicated to Mary the Mother of Jesus, or possibly Mary Magdalene, and was known as the ‘Old Church’. From there Joseph or Arimathea became Britain’s first Christian evangelist, and here Joseph died (by tradition on 27th July, in 76 or 82 AD) and was buried in the ‘Old Church’. It was on this site that later monks built the great monastery at Glastonbury where they venerated Joseph’s remains. A similar tradition, from the apocryphal ‘Gospel of Nicodemus’, states that Philip and Joseph came to Lydda (which may well be the isle of Lundy, also associated with Ynys Avalon) where they founded a church dedicated to Mary.

Maelgwyn of Landaff, uncle to St. David, wrote around 450 AD that “Joseph of Arimathea, the ‘Noble Decurion’” is buried on Avalon with his eleven associates, where “he has with him two white vessels of silver which are filled with the blood and sweat of Jesus”. This early reference to specific ‘Grail’ objects has been central to the legend of Joseph’s ministry in Britain. The most popular Grail tradition is that he brought with him the cup used at the Last Supper in which Joseph also caught Christ’s blood, and medieval romances have raised this up to be the glorious symbol of a high ideal to be sought by all who would quest after truth and glory.

Greatest of these Grail Quest stories are of course the tales of King Arthur’s knights, as told by romancers since the early Middle Ages. Robert de Boron brought many of the above Grail traditions together in his romance, ‘Joseph d’Arimathe’ written shortly after the supposed body of Arthur was found at Glastonbury in 1191. This tale was in turn derived from various sources, notably Breton tradition and the writings of Geoffrey of Monmouth and Chretien de Troyes in the mid twelfth century. The latter in his romance ‘Perceval’, based on Celtic myth, includes the concept of a quest featuring a grail, a spear that drips blood (supposed to be the spear that pierced Christ’s side, also brought to Britain by Joseph) and the crippled Fisher King, their keeper. Following on from Robert de Boron came the ‘Vulgate Cycle’, written by various hands, which takes his story of the bringing of the Grail by Joseph and links it directly to the story of Arthur, Merlin and the Grail Quest of Knights of the round table. Ultimately the Arthurian tales and those of Joseph were united, notably by Malory in his ‘Morte D’Arthur’, in which the dying Arthur is born to the isle of Avalon, so long associated with the place of Joseph’s death and burial.

Central to these tales are the knightly virtues of chivalry, duty and courage, often in the face of hostile and uncomprehending world. The image of the wounded Fisher King (so closely linked to Joseph of Arimathea and his Brother in Law, Bron) in his barren land, which can only be redeemed by a perfect Grail knight asking the right questions, has been seen as analogous with a barren and broken society. Subsequently many ages have turned to these stories and the philosophy which lies behind them, and the leading figures in those societies have seen themselves leading a new ‘Arthurian Age’, where the broken or dissolute society which had preceded theirs would be redeemed by turning again to the chivalrous virtues exemplified by the Arthurian Knights. Thus have the reigns of Edward III, the Tudors, and most particularly the Victorians have seen a harking back to a chivalric Arthurian tradition.

The Victorians embraced the ‘cult of chivalry’ with more ‘Arthurian’ writing than had been seen since the twelfth century, and with outward displays such as the famed Eglinton Tournament. The Church of England in its gradual embracing of the ideals of the ‘Oxford Movement’, rediscovered its catholic heritage with the return of many rituals and practices which harked back to the pre-reformation medieval Church. Also of great interest, and importance, alongside the writings of Tennyson, White and Scott, and the Gothic revival style, was the rise of a movement that called themselves ‘Young England’. Formed by Lord John Manners, and numbering the likes of Disraeli in its ranks, this movement dedicated themselves to “a return to order, discipline and obedience, the preservation of established institutions, and a deeper reverence for ancient ways.” Armed with their lofty ideals, Young England knights rode forth like their ancient ancestors, righting modern wrongs with medieval methods, and seeking for a better, caring and dutiful society.

The Arimatheans echo the sentiments of ‘Young England’ in their concerns for a modern society that has, in most of its political and cultural institutions, fallen so far from noble chivalric ideals. Our name reminds us of the foundation of all this tradition in Joseph of Arimathea, the ‘Noble Decurion’, the special place that Britain holds as the mystic isle set apart, and the hope of rebirth that the Grail symbolises.