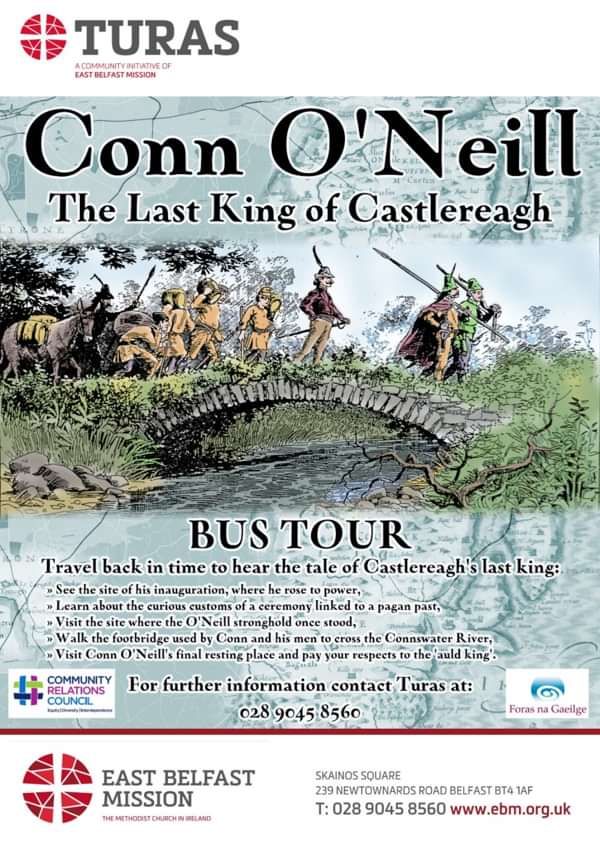 This bus tour will transport you back in time to the ancient townlands once ruled by the last king of Castlereagh. Accompanied by a local tour guide you’ll travel back in time, and experience the dramatic arc of Conn O’Neill’s life, as his story unfolds in the landscape where he rose and fell.

As your tour guide weaves together history and folklore in the telling of Conn O’Neill’s story, you’ll visit these locations: Your tour begins with the ancient rath at Lisnabreeny and the beginning of Gaelic life. You’ll see the site of Conn’s inauguration, where he rose to power, and learn about the curious customs of a ceremony linked to a pagan past.

You’ll visit the site, high in the Castlereagh hills, where the O’Neill stronghold once stood, see a panoramic view of Conn’s townlands, and hear the tragic tale of his downfall. You’ll walk the footbridge used by Conn and his men to cross the Connswater River, when they travelled from the coast up to his hilltop castle. You’ll visit the overgrown garden which some believe is the location of Conn O’Neill’s final resting place, and perhaps, you’ll be inclined to pay your respects to “the auld King” as the tour ends.