Out now on all major platforms is my new recording, "The Way That It Is", featuring an amalgemation of smooth electronic synthesis, psychedelic instrumentalism, and my first foray into seriously falsetto lyricism. 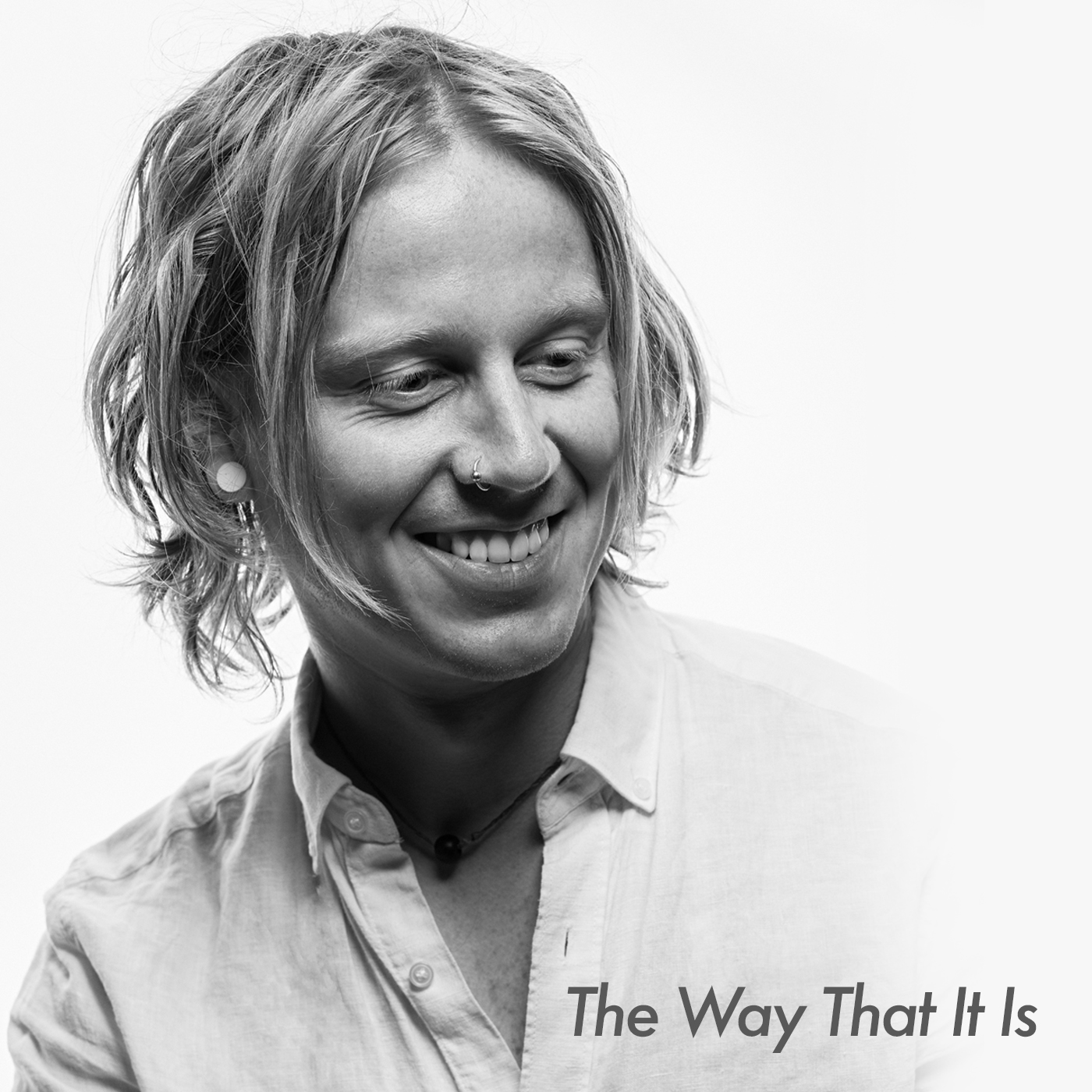 There's a lotta themes going on in the words for this track (check out the lyrics at the end of this post) and I thought it would be cool to write my first ever blog post and talk little bit about them as well as my songwriting and recording process.

I love male singers who hit the high register from the get go: Kevin Parker in Tame Impala, Julien Ehrlich from Whitney, James Vincent McMorrow, Justin Vernon's Bon Iver project, Peter Liddle out of Dry the River; these are all super influential songwriters for me. It occurred to me that I've never done a song in this fashion though I often sing along to these records and have even learnt to play a couple of them on the guitar. My intention when I wrote this song and the melody for the verses was to make up a line that was in a ridiculously high register to sing. At first it sounded really bad and scratchy but, as I got a feel for the notes, I figured the trick is to sing softer than you would in your head voice and dip in and out of that regular singing voice when the notes get too low to sustain in the falsetto. I played around with it a lot just in the kitchen and stuff before I recorded the vocals.

When I recorded the singing, I used a recording technique called double tracking which I tend not to do with my own vocals very often. It’s a popular technique used by artists and producers all the time: David Bowie & Kurt Cobain were famously good at it. Double tracking vocals helps give the voice thickness and presence in the mix and is achieved, essentially, by having the singer perform the song twice and then situating the vocal recordings side by side within the mix. If the singer is good at what they do and can sing it exactly the same both times then the listener can hardly tell there’s two of them singing at all. I use double tracking on my guitar solos all the time but tend to prefer a more ‘down the middle’ vocal sound. However, it really suited this more delicate singing style so I went with it for this tune.

The backbone of this song is a one bar loop: the complete opposite to my last few releases which don’t contain any loops or samples and weren’t even recorded to metronomes! I went back to the project file for my track, Mysterious Waves, and snipped out a single beat from the kick drum channel. Then I recorded myself snapping my fingers a buncha times and stacked em all up so that it sounds like loadsa people snapping their fingers. Then I looped those two sounds and that’s really it: just a kick and a snap. The rest is history, folks.

I like the finger snap and it’s used really well on, ’Cause I’m a Man”, by Tame Impala.

Speaking of that band, the instrumental break that comes in at the close of the second chorus (with the big fuzzy guitar and overdriven drum sound) is super inspired by early records of Tame Impala: Innerspeaker and Lonerism. That drum sound is, to me, the essence psychedelia and it’s place within rock and pop music: minimal microphones (I used one), plenty of tape distortion, and lots of phase and panning. I put that in as a little ode to Kev and, as much as it is really out of the blue and clearly an unexpected movement within the song, it does somehow fit and it’s nice to have a bit of organic audio in the rhythm section… I’m also really proud of the organ solo: I don’t really play keys at all but I feel like I NAILED that.

The two chords that make up the verse sections are E major into an F# minor chord and are kinda-sorta inspired by Tom Petty’s, Free Fallin’, but I go straight back to the tonic where he has that cool turnaround. This isn't an intentional thing but I gotta say I noticed the similarity when I was mixing the track. It sounds like the opening of that Petty tune. Once I had recorded the bass line I realised I'd accidentally added a few chords as passing notes on the bass part so I had to go back and redo the guitars to match. This actually really helps the track breathe and have more variation instead of just riffing from E to F#m the whole dang tune.

An example of this chordal variation is at the end of each verse where the chords continue up the scale to G#m and finally end on A. This rising chord pattern makes up the backing for the riff and melodic (“ooooh”) hook that kinda defines the track and acts within each section as a motif and resolve. It's funny how accidents like this can become the core of a song. That's why I love recording my songs and I feel a pull to get the equipment out almost as soon as I get the first inkling of a new idea (even before I’ve finished all the words). For me, the recording process can work as a compositional tool just as much as a guitar, pen and paper can.

••• Out of interest, if anybody wants to get the chords for this song you can reach me at davidshurr@gmail.com •••

The verses are super wordy and you really gotta get your gob around the staccato rhythm of it when you're singing it out. At first, writing the lyrics, I just riff along in gibberish to the chords on guitar. It helps to have no one around for this. Eventually I find myself repeating words or phrases and then I write them down. I know Jeff Tweedy out of Wilco doesn't write down lyrics... ever... but I always do. As soon as a phrase sticks I write it down and the next words come faster after that. The rhythm of the syllables is key and, naturally, I find writing in this way (with a guitar in my hand) most effective for songwriting. Not always, though, as is the case with my last release, Always Be, which I wrote in it’s entirety before even picking up an instrument!

I looked it up and, while ‘sourer’ is not in the dictionary, it is actually a Scrabble-approved word which is good enough for me. ‘More sour’ is not, in this instance, appropriate. “If you crowd up all the hours of the day it takes a sourer taste” is really the sentiment of the song: trying to battle back those encroaching thoughts that tell you you’re not busy enough, productive enough, or successful enough. I don’t want to tell you what the lyrics mean … but, yeah, that’s totally what those lyrics mean.

The “hundred thousand hours just to turn my back and cower counting every penny left to my name” is about the struggle of continuing to work creatively and channelling energy into being productive in a musical format when there’s little monetary reward. It’s difficult, sometimes, to work in this way if you’re struggling financially… Not just because of the time management (having a job, making time for friends, etc) but because of the mental investment involved. I don’t think everybody will understand this but I totally love music and it really takes over my mind in an obsessive, compulsive, all encompassing process. I can go days, weeks even, where music is revolving around my mind: I can actually hear it in my head. The tone of the guitars, the percussive elements and where they’re placed, the backing vocals’ harmonies, and the FX I want embellishing here and there in the final mix. It’s pretty insane! So this line is like… expressing the frustration of all the time spent meditating on this process and then carrying it out in reality in the studio just to be like... “does it even matter?” kind of thing... Obviously it's worth it though lol.

“A part of what is difficult is also really similar to what was always simple to me” is a crazy line. It does make sense, though… If you read it a few times. When you try to make sense of the way you are, asking “Why am I this way?”, and comparing yourself to other people then you will rarely find any answers. You can twist it any which way and you’ll never be satisfied. Only when you live within that archetype do you realise the potential for simplicity and being free of those self accusations. When you carry out the actions that truly fulfil your soul, make you feel accomplished, and engage your mind and body: in those moments it doesn’t matter “why am I this way”… It’s just the way that it is.

Make no bones about it if you crowd up all the hours of the day it takes a sourer taste, The littlest of feelings are the hardest parts to please and probably farther from your heart than you think, Everything is perfect on the surface of it but under the skin it's all caving in.

When I wake up in the morning or the middle of the night, The moment I look up and see the colour of the sky I want it to be so differently, But if I should make up a sound that you had never heard before and sing it aloud the way I love and adore, I'd want it to be the way that it is.

Everything I wished for was a beautiful picture that I wasted trying to keep in a frame, A hundred thousand hours just to turn my back and cower counting every penny left to my name, Call me a dreamer while I silently weep, It's hard on my cheeks but I couldn't sleep.

Sometimes I get to thinking when I'm really sick of living out the life that I have chosen to lead, A part of what is difficult is also really similar to what was always simple to me, Everything is perfect if you want it to be, In infinity a heartbeat.