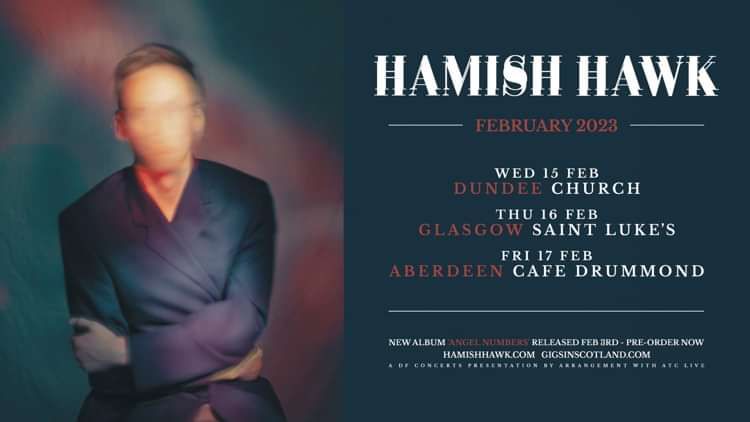 
Entry Requirements: 14+ Under 16s must be accompanied by an Adult

Plus Support Additional Info: 14+ (Under 16s with an adult) Tickets: https://www.ticketweb.uk/event/hamish-hawk-church-dundee-tickets/12482875?REFERRAL_ID=twfb

Vivian Comma paints the Madonna, visibly on the verge of fainting. Christopher Wren walks amongst us once more, forswearing designing cathedrals for singing them. One half of the 1973 Mauritian Badminton Doubles Champions has a perfect serve. The boy who inhabits Track Three of John Lennon’s Imagine repeat-dials, passive-aggressively, to Tiree. A funeral, swinging to the Gay Gordons. A latter-day Paul the Apostle is offended by the sight of Edinburgh Castle – and, infinitesimally worse, can’t finish a beer.

These are the people and places, scenes and scenarios of the songs of Hamish Hawk.

Rich of voice and even richer of imagination, the singer-songwriter from Edinburgh creates musical pen-portraits as vivid in lyric as they are in melody. In all the wholly best ways, these are chamber pop songs that have swallowed both a dictionary and a compendium of modern urban (and island) fairy tales. And, on Heavy Elevator, his first fully-formed album, this prolific artist presents a perfect ten tracks packed with characters, incident, emotion, geographical/artistic references and tunes to hang your coat on. Hawk does all this with considerable wit, inspired by artists like Leonard Cohen, Morrissey (the olden days version), Jarvis Cocker, Randy Newman, and Stephin Merritt of Magnetic Fields.

‘Calls To Tiree’ is the follow-up single to 'Caterpillar' which was playlisted at BBC Radio 6 Music, Radio Eins and featured on Radio X’s X-Posure playlist.