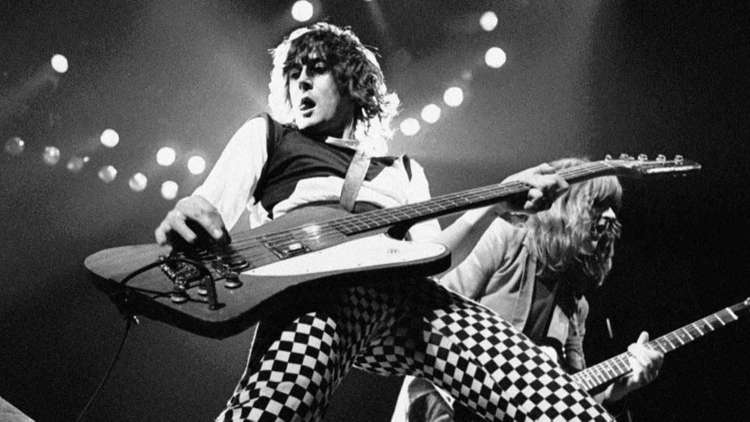 2019 sees Pete Way hitting the live circuit for the first time in several years due to being dogged with bad health. In the interim he has had a critically acclaimed best selling autobiography “A Fast Ride Out of Here” as well as putting the finishing touches on his new solo album “Walking On The Edge” which has guest musicians including Slash on the Mike Clink (Metallica, Guns ‘n’ Roses) produced album. Having teamed up for live work with ex Pat Travers, Wild Horses and UFO drummer Clive Edwards, Tim Scopes on lead and slide guitars and ex Waysted multi instrumentalist and rhythm guitarist Jason Poole. Pete will be bringing his solo work as well as Waysted and UFO hits to the stage as vocalist and bass player. He says “I am just desperate to go back on the road. It’s the part of the business I love the most and I’ve been away too long.”

In a career spanning more than five decades, rock musician, songwriter and producer Pete Way has established himself as a much-loved and highly regarded figure among rock fans, critics and fellow musicians alike. Best known for his work with UFO, Pete’s energetic live performances were at the heart of the band’s countless world tours, and his melodic basslines underpinned the catalogue of enduring Rock classics upon which UFO’s reputation and legacy are founded. Indeed, in a recent radio interview, Pete attributed the band’s ability to weather changes in the musical landscape (UFO had a Top 30 album in the UK at the height of punk), and in the band’s line-up over the years, to the strength of their songs.

The briefest glance at the songwriting credits of any of the albums recorded during the band’s 70s/80s peak period, many of which attained high chart positions in both the UK and US charts, will show just how significant Pete’s contribution to the style and sound that appealed, and continues to appeal, to generations of Rock fans around the world; fan favourites such as “Too Hot To Handle”, “Lights Out” and “Shoot Shoot” all bear the hallmarks of Pete’s signature songwriting style, and are cornerstones of the band’s live set to this day.

Pete’s post-UFO work has included stints with Fastway (alongside members of Motorhead and Humble Pie), Ozzy Osbourne, and his own long-running band Waysted, whose albums featured more songs in which Pete’s songwriting contributions were prominent. The Waysted back catalogue contains another brace of tracks (such as “Love Loaded” and “Heaven Tonight”) which have followed in the footsteps of Pete’s work with UFO in becoming fan favourites to this day.

The popularity and lasting appeal of so many songs co-written by Pete Way is still ongoing, in some cases 3 to 4 decades after their original release. Recent years have seen an extensive re-issue campaign via EMI, covering UFOs 70s and 80s albums, along with collections of vintage live and session performances from the band. In 2013 alone, two such collections have been released, again via EMI, in the shape of the “UFO at the BBC” box set and the “Hot ‘N’ Live – The Chrysalis Anthology 1974-1983” live album, and two classic Waysted albums from the 80s (“Vices” and “Save Your Prayers”) from the 80s have also been re-issued, due to demand for these releases on CD.

Pete’s keen ear for song arrangement has also seen him serve as producer for popular Hard Rock acts such as Twisted Sister and the Cockney Rejects (whose Way-produced album “The Wild Ones” has just been re-issued on cd). Pete’s ability in the production field was also developed while working with such respected producers as George Martin (famed for his work with The Beatles) and Ron Nevison (whose credits include Led Zeppelin, The Who, Meat Loaf and Heart) during his UFO days.

Pete is currently about to release his latest solo album, “Walking On The Edge”, which sees him adding to a peerless catalogue of classic Hard Rock songs, with fresh material bearing all the trademarks of the melodic, memorable style for which he is known.