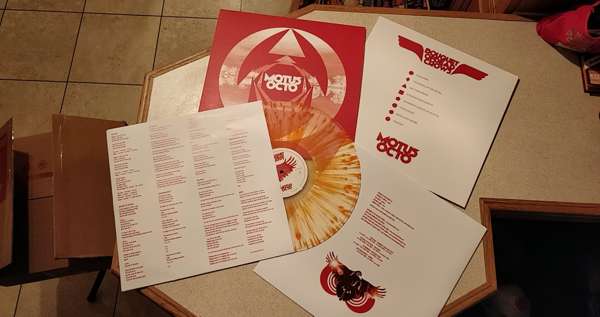 The Brand New album released the 23rd of November 2018

The title (referring to the fact that there are eight tracks on the album), essentially means ‘eight movements’, or eight emotions.

Bouquet of Dead Crows are;

......the quartet goes from the heavier waves of Alternative Metal to the charm of British Rock and the melancholy of Blues, extracting crisp and vibrant sounds from their instruments throughout the entire album, keeping us hooked on their music and always eager for more. THE HEADBANGING MOOSE

with their second full length and a fuller, more aggressive sound emerges, consolidating the tension between the hard rock of the music and Toni Cooper’s melodic vocals. The music takes on a much broader more orchestral sound, the riffs are heavier, the structures are more complex. The band have demonstrated a clear development of their sound in this release. AURAL DELIGHTS

It's a big step forward from the debut. The songs on the debut were great, but on Motus Octo they seem to be finding their own sound as well, which I think is down to pushing the boundaries and adding more depth to the songs, especially the longer ones. The guitar sound is wonderful as ever, but with added changes in tone and tempo- everything from almost pastoral picking to brutal riffing. There's a denseness and, dare I say, darkness to the sound at times (even to the song titles) which, to these hairy ears, had hints of Sabbath and Soundgarden in their pomp. Which is obviously a very good thing. There's a real depth, swagger and power to the rhythm section which adds to this and Toni's singing is a revelation. She's not just singing, but owning these songs, with a super confident, strident and sometimes edgy delivery which left my hairs (metaphorically speaking of course) standing on the back of my neck. DAVE HAMMOND, CAMBRIDGE 105

The Devil's In The Detail - yhttps://www.youtube.com/watch?v=lLUL7aPotqc

The Devil's In The Detail - Lyric : Bruce, Cooper / Music Bruce

Extra vocals on Cold Inside By Jethro Steel

Recorded and Produced By Neil Haynes at the Parlour www.parlourstudios.co.uk