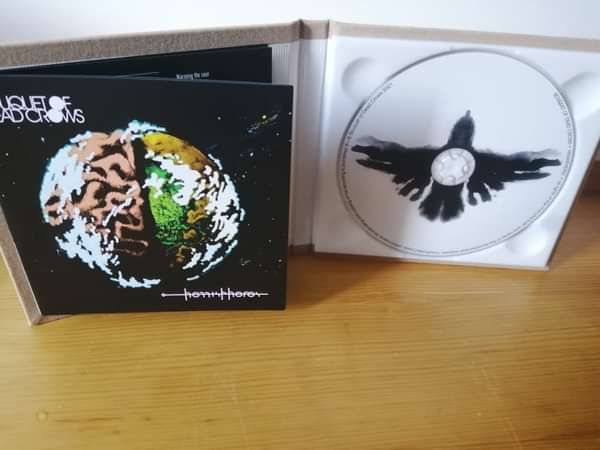 Bouquet of Dead Crows are pleased to announce the brand new album ‘Hemispheres’ in a limited edition esoteric grey hard back book CD.

Including the singles ‘Left To Rot’, ‘Kaiju Hijinks’, 'Standing At The Precipice', and 'Idle Thoughts' - Hemispheres, the bands 3rd album released through German Shepherd Records, is the first album with Karen Gadd on bass duties.

The album is made up of two separate parts. - Part 1 : 'Celestial' was released digitally last year and is the first 6 tracks of the album. 'Cerebral' was released digitally Oct 21 and is comprised of the last 5 songs. So 'Hemispheres' is essentially the collective name for two separate halves that make up a whole. With CD being the only way to listen to it as an album, rather than two different EPs. Musically, the two halves have different sonic properties; celestial is fairly punky and high energy, and Cerebral is more post-rock sounding.

The album does have an overall theme of mental health, which is a topic the band are very passionate about. With each song, they've written about issues that effect them individually and personally. There's been a lot of stigma about depression and anxiety over the years, and as the mood slowly shifts this album captures the zeitgeist of our current unpredictable day-to-day life, the fears we are all experiencing right now. Although written before the current pandemic that the world is currently experiencing, a lot of the lyrics do seem strangely prescient and also very relevant. Such as the chorus of the title track 'It's not the end of the world...this time, it feels like the end of the world...every time'. This chaotic realisation that what feels like the end of the world, may not be. That there is a community, a beauty in all the destruction and repair that every one of us faces. Every heavy riff is wrought from the exact moment a human sees their own mortality and hopes for healing.

This latest chapter in the Bouquet of Dead Crows story finds the quartet adopting a more progressive sound with their trademark riffs with big melodies approach being enhanced to incorporate more layered and nuanced elements, different time signatures, and more reflective and sometimes ambient sections. The duality of the album title is carried through to the music. Intense hard rocking sections contrast with quieter moments.

Pre-order the album on CD* today and receive an instant download of the first 6 tracks (Celestial), with the full physical album being released later in the year.

*The full CD album will be available in a limited edition hard back book, on the 22nd of October.

Once again the artwork for the album has been done by long time collaborator Stewart Harris Stewart Harris Designs plus some great work by Ben Goddard of Frogbelly fame. https://stewartharrisdesigns.myportfolio.com/

Watch the videos for 'Kaiju Hijinks' and 'Hemispheres' below;

7.Idle Thoughts : Don’t be fooled by the quiet intro, the deep dark guitar and bass soon steers the track into raw rock territory, as the vocal calls across the wasteland in this ever-changing epic.

8.Standing At The Precipice : Faster work-out for the band, especially the fireworks drumming, but full of surprises with time signature and dynamics changes all packed into two minutes thirty.

9.One More Sunrise : Straight into the soulful tones of a thoughtful ballad structure which alternates with some of the heaviest rock on the collection.

10.The Longest Road : The Crows are adept at creating longer conceptually rich pieces; this elegantly brooding anthem has the time and space to deliver the full emotional impact.

11.Somewhere In The Static : Built around the most satisfying bass and guitar riff at the start the vocal builds over the descending chord pattern to a false finish part way through. This song has many moods; weaving together the finesse of some of the prog rock directions of the band with sections of sledgehammer power to make it a fitting end to the album