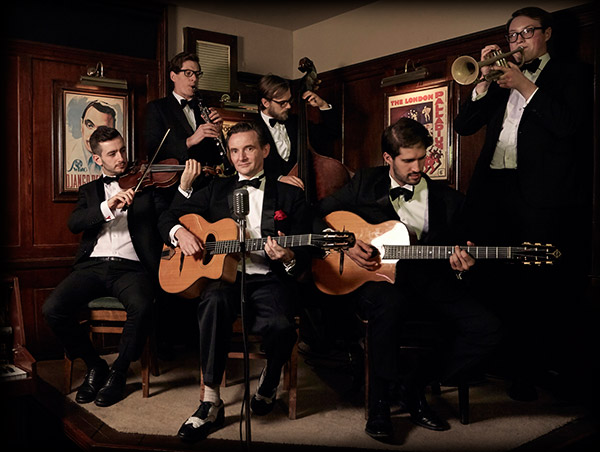 Inspired by the swinging music that emerged from the infamous Parisian Cafes and nightclubs of the 1930s and 1940s, Benoit Viellefon presents his Hot Club. A unique ensemble that celebrates the popular songs played by artists like Django Reinhardt, Stéphane Grappelli, Louis Armstrong, and Sidney Bechet. With all the romanticism and nostalgia of the French repertoire and with a nod to the American jazz virtuosi who visited Paris, the Hot Club is the perfect mix of European finesse and the restless fervour of American hot jazz.

The Hot Club is made up of the finest musicians on the London jazz scene, all of them bringing their own character and experience, and contributing to the unique identity of the band. Fronted by Benoit himself on guitar and lead vocals, the timeless 2-guitar and double bass format is spiced up with a variety of instruments including violin, clarinet, trumpet and sometimes piano. The band’s repertoire consists of all the popular songs from the classic French, American, Italian and Russian songbooks. Capturing the sights, sounds and sensations, the Hot Club truly embodies the spirit of this bygone era.

Consistently first choice at vintage festivals, high profile events across Europe, as well as boasting residencies in London’s most exclusive clubs and concert halls, their busy diary is testament to the public’s love for their music and the atmosphere they create. Most recently they have appeared on national television and radio, and have played for the likes of Rowan Atkinson and Madonna.

You can get a chance to experience a trip back to the Paris St-Germain Jazz clubs of the 1930's at the Band's regular event hosted on sunday nights at Ronnie Scotts (look at listings below to book). You'll get to see the best swing dancers the country has to offer on this world famous dance floor, the whole things looks like being straight out of a hollywood period film.

Over the last six years the band has played over 700 concerts in venues of all shapes and sizes to people of all walks of life. Wherever they play, they never falter in their endeavour to entertain their many audiences, especially those who revel in the nostalgia and elegance of the golden era of entertainment. They are one of the bands that pioneered the revival of a vintage culture that has recently swept across all parts of Europe and the USA, a culture who’s music, fashion, dance steps and lifestyle have captured the imagination of a new generation.

They hope to hear from you soon! 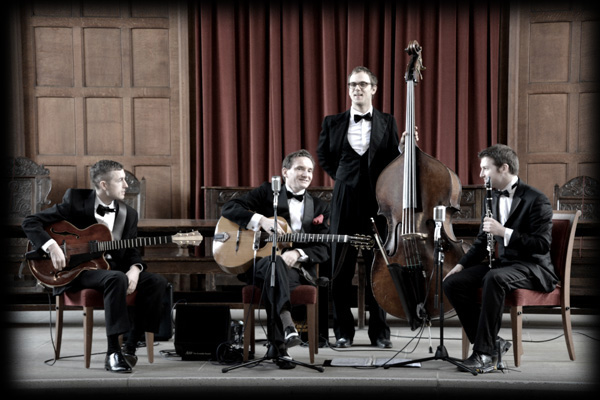