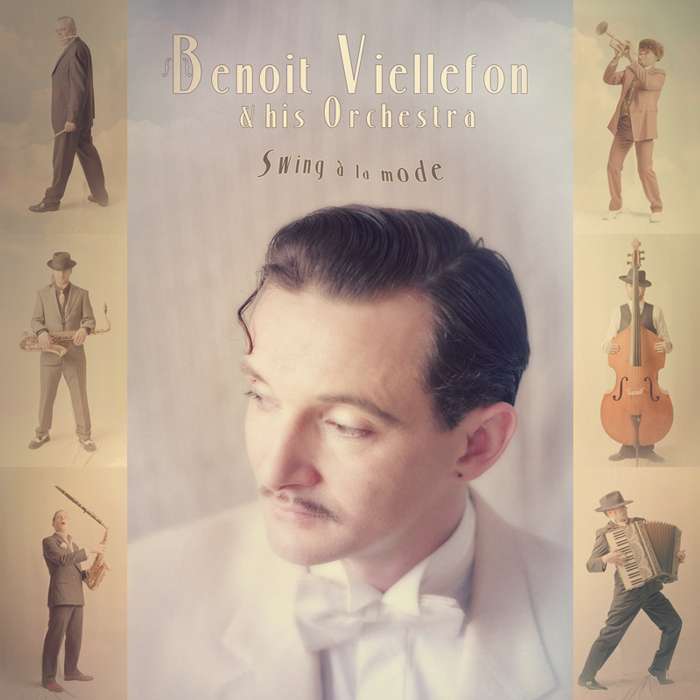 Volupté is a relatively new venue tucked away neatly among the corporate corridors of Chancery Lane. The layout of the subterranean restaurant is cosy yet ample. Our reservation had requested our attire be smart/glamorous and we take inspiration from the 1920s-40s, duly I accessorised with heels and red lippy, for this was indeed a burlesque venue and we were here to see Benoit Viellefon and his 20s/30s inspired jazz orchestra. The sumptuous décor had artwork on the walls of glamorous icons from the period and the grand piano, topped by a lamp rich with dangly crystals was very Marlene Dietrich.

The DJ was playing the Jackson 5 which seemed somewhat unsympathetic towards the night’s entertainment in store; however a vodka Martini helped us overlook this blip.

The band were thankfully also dressed to impress; Benoit cut a neat petite silhouette in his suit and cravat, Geoffrey Threadgold, clad in braces at double bass and Hugo Simmonds, suited and booted at the piano had the most genuine short back and sides, Brylcreemed to perfection. They struck up with a couple of rousing jazz favourites; All of Me swinging fast with stride piano overlapping the bass made for an authentic wall of sound enhanced incidentally by the slightly off kilter tuning of the keyboard. Benoit’s soft voice just cut over the accompaniment; his Reinhardt style guitar chopping the chords complimented the fine percussive accompaniment of Mark Huggett at the drums. Peter Horsfall too created space for his trumpet solos around the ensemble, blasting out some fine cascades and stabs. A band favourite was George Bruns’ I Wan’na Be Like You, the Disney classic clearly a winner with the audience. Benoit encouraged interaction and even invited an excited young lady up to sing a chorus with him and although they had not met before they gelled beautifully. Other songs took a more romantic and distinctly Parisian angle, Sous le ciel de Paris was quite striking and perfect in our setting, it all felt rather filmic.

Our waiter for the evening ensured our courses arrived timely and our glasses were topped up. We enjoyed the soup, fish cakes and duck between us along with a fine bottle of red. In the interval there were two burlesque turns by Vicous Delicious a svelte lady who executed with finesse a routine that involved bursting balloons on her person to expose almost everything beneath. Her second dance incorporated two enormous feathered fans and her wonderfully expressive face provided a carry on style comedy atmosphere (although she could probably have done with a little more room to strut her stuff.) We ordered our puddings and the band returned.

Caravan provided the perfect vehicle for their Latin/swing dexterity, composed by Juan Tizol and first performed by Duke Ellington in 1937 it sat solidly inside their remit. Mark Huggett’s drumming was superb and could really have benefited from a longer solo than just the first two A sections. The rhythms were tight and hot. The show closed with the Russian gypsy song Black Eyes the tempo rose from a stately walk to break neck speed with the assistance of claps from the audience.

Benoit Viellefon and his small orchestra definitely reside within the cabaret end of jazz but their combined individual skill almost makes them a crossover ensemble. Volupté is intimate and homely and is attracting increasingly well known names in jazz notably Anthony Strong. I think they could well go some way to filling the void left by the closure of Pizza on the Park.  - Jeanie Barton - London Jazz