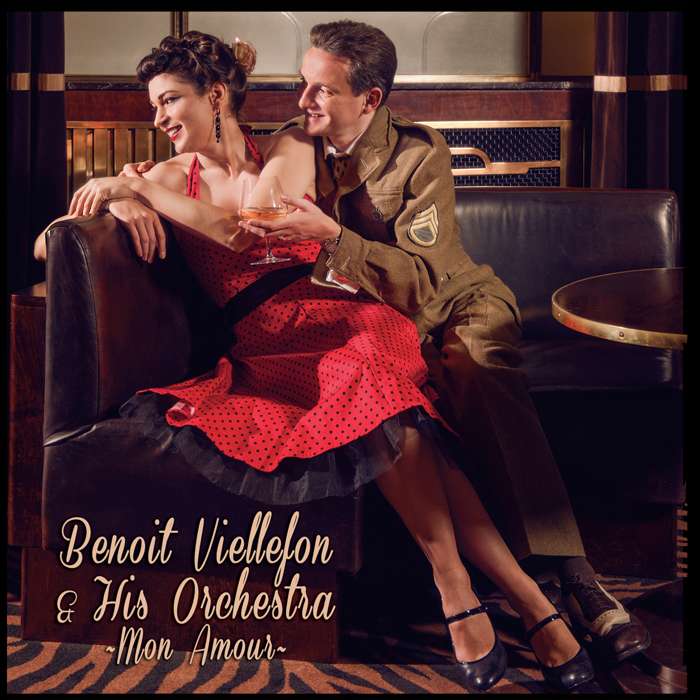 In the early 2000s, the swinging music of the 1920s, 1930s and 1940’s was not considered fashionable and was all but forgotten by record companies and the world of show business.

Since then, away from commercial music, from the fakery and manufactured artists of contemporary pop music, a revival has taken place across the world. The music, fashion, dance steps and lifestyle of this bygone era have captured the imagination of a new generation searching for a real experience. Retro clubs, period dance events, vintage fashion and swing music has spread just about everywhere in Europe and the USA and, it is no exaggeration to say that at the heart of the London revival scene is Benoit Viellefon & His Orchestra. And their growing fan base demonstrates time-and-time-again the public’s love for this music and lifestyle.

Presently, after five years and over 600 concerts, Benoit Viellefon & his Orchestra are proud to present their landmark album Mon Amour. The album was recorded in January 2014 by extraordinary sound engineer Nick Taylor, at London's Porcupine Studios, a family run studio that has been a second home to successive generations of legendary British jazz artists since the early 1960s. Featuring a selection of tunes from the 1920s to the early 1950s, specifically the songbooks of the USA, England, and France, the album is an exciting look at the music of a time when dancing and entertainment were key, arguably show-business’ golden era!

At the core of the album is the admirable rhythm section of drummer Gaspar Sena, bassist Geoffrey Threadgold and pianist Joe Webb, never failing to provide the swinging beat that drives the music and gets people moving on the dance floor. With the assistance of Sena, Webb worked tirelessly orchestrating the music. Brought together tastefully and stylishly, the arrangements are the Orchestra’s chance to put their stamp on the history of this music. Executing the horn arrangements and weighing in with inventive and swinging solos are the horn section. Talented reedsman Dave Shulman and trumpeter Pete Horsfall are founding members of the Orchestra. Their contribution is complemented by the tenor saxophone work of Duncan Hemstock and the tight section playing of saxophonist Fraser Smith and trumpeter Evan Clegg.

Captured perfectly on the album are Benoit’s charm and personality, facets that tie the band together and give them a unique identity. In addition to contributing three original compositions, he provides both the quirky lead vocals (complete with French accent) and stomping rhythm guitar throughout. Making their debut with the Orchestra are Gabrielle Ducomble, an outstanding vocalist from Belgium now working in London, and talented actress and singer, Anna Tyrie. Their valuable contributions take the form of three duets with Benoit; title track Mon Amour sung in French by Gabrielle, the classic Cheek to Cheek, and original composition It Ain’t Me both sung by Anna. Not to mention their silky harmonies on Pennies From Heaven.

Benoit Viellefon & his Orchestra have been fiercely independent in performing, producing and financing their own music. Wherever they play, they never falter in their endeavour to entertain their many audiences and to conquer each and every one of their hearts.

"This definitely sounds like a phenomenon worth catching live" - F.Roots magazine