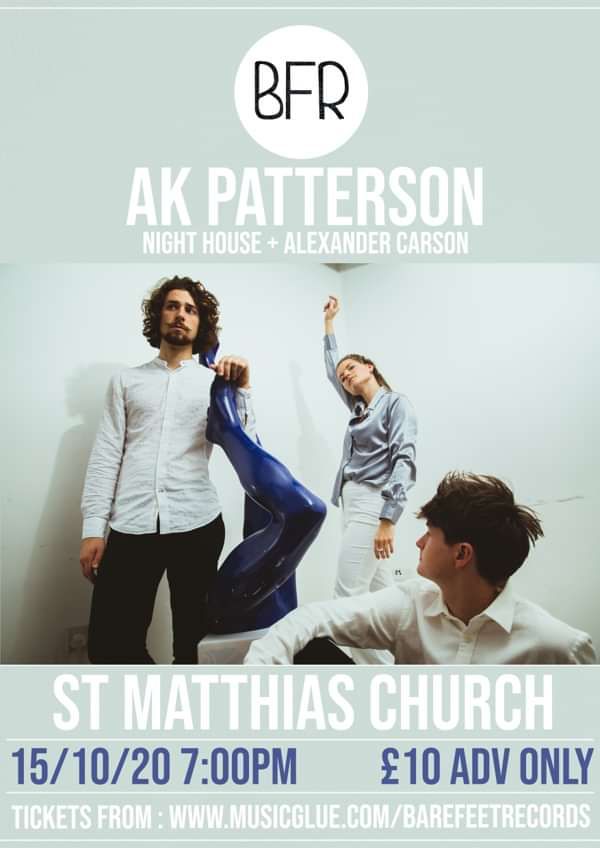 AK Patterson are a three-piece formed in Brighton after lead singer Alex, an art-school graduate found fellow bandmates Alfie and Nat on the festival circuit in 2015. With comparisons to the visceral attack of PJ Harvey, the feral cabaret of Nick Cave and the post-modern jazz grooves of GoGo Penguin, AK Patterson are a whirlwind of contrasts.

The multi-instrumentalists flavour the warmth of their organic instrumentation with electronic experimentation in the shape of mood-setting field recordings and subtle synths.

In 2018, the band worked with award-winning producer Charlie Andrew (Alt-J, Marika Hackman, Nick Mulvey) on their debut EP, Shadows. Following its release, they were invited to support Alt-J on tour culminating in two shows at the Royal Albert Hall. They subsequently embarked on their first headline tour in 2019 appearing at London’s Oslo. Festival appearances include Latitude, Boardmasters, Victorious, The Great Escape, Live at Leeds, and Blue Balls (Switzerland).

The band’s versatility has led to multiple collaborations, including the scoring of a short film, Adira’s Dream which has won numerous awards at festivals in the last year.

On 4th September 2020, AK Patterson released a brand new track in the shape of ‘Out of the Steel Works’. It features on their forthcoming EP Mettle, again produced by Charlie Andrew, and will be released on 15th January 2021.

Tickets are ONLY available in advance - no tickets will be sold on the door to control capacity and manage track and trace.

The venue is fully socially distanced. You can choose to buy a solo, duo, or trio ticket.

A licensed bar is provided so please don't bring your own alcohol to the church.

All audience members will be asked to use the provided hand sanitizers on entry/exit of the building.

We ask that audience members wear masks/face coverings throughout the performance and in the building.

And we also ask that if you have ANY symptoms or a fever please do not attend the event - if you have purchased a ticket and start to feel unwell please email alex@barefeetrecords.co.uk and we will arrange a refund or ticket transfer.

Doors will open at 7pm and music will be begin at 8pm - no entry will be permitted after 8pm and when you buy a ticket we will advise your personal entry time so we can stagger arrivals to avoid any large queues.

"Hushed tones interlocking with sedate elements of electronics, reference points could include everyone from Bon Iver to James Blake” Clash Magazine

Brighton-based Night House blend electronic beats, orchestral arrangements and lyric-driven song-writing, drawing from a wide range of influences such as the electronic work of James Blake and Radiohead and the folk harmonies of Sufjan Stevens, Joni Mitchell, and Bon Iver.

Night House has a sound that is almost spiritual; beautiful, uplifting ethereal harmonies meld with modern electronica to create a warm, intelligent sound that is reminiscent of Bjork and Wild Beasts, with lead singer Nicholas Williams described as a “falsetto Tom Waits (Radio Reverb)”

This year Night House release their debut album Everyone Is Watching From Afar which was co-produced and mixed by Dan Brown (Massive Attack, Jerry Williams, Luca). Written during a period of family bereavement the records personal lyrics drift over warm strings and clarinets, where layered vocal harmonies meet icy synthesizers and electronic beats. The unique album features performances from a range of Brighton artists, including the lead vocals and harp of acclaimed songwriter Ellie Ford on “The Roots in the Wires”.

The singles from EIWFA have pick up support from tastemakers such as PRS for Music, Clash Magazine, BBC Radio, The Vinyl District (artist of the week) and Come Here Floyd; with videos premiering via Attitude Magazine, God is in the TV and Circuit Sweet.

The songs are full of melody and ambition, accessible yet layered and deceptively complicated. Themes of family, relationships, loss, societal pressures and emotion resonate throughout the album.

Night House have supported many artists including Ben Howard, Willy Mason, Solomon Grey, Krystle Warren and The Magic Numbers. Road testing the material for “Everyone is watching from afar” took the band on four European tours, including headline shows upstairs at Ronnie Scots Jazz club as well as sell out home town shows at Brighton’s St Nicholas and Unitarian churches. They've performed at many festivals including at The Great Escape, Rhythm Tree, The Isle of Wight and Ynot.

The result is a combination of the folk-tinged offerings of acts such as Villagers with the delicate, intimate synths of James Blake. Merging poignant, minimal soundscapes with the aching vocals of singer Nick Williams, ‘To Be With’ is a dreamy, emotive production full of ambient twists and turns. *Fortitude Magazine *8/10

"Combining elements of electronica, alt-folk with pop sensibilities, Night House really are on the brink of something special—mark our words."** Vinyl District Artist of the Week**

"Unfold is a truly stunning and intricate arrangement showcasing Williams’ intensity and talent as an artist. Emotive from the get-go, masterfully weaving lyrics and textured electronics providing the ultimate combination."** Circuit Sweet**

‘Unfold’ offers a huge amount of depth, both lyrically and sonically Fortitude Magazine 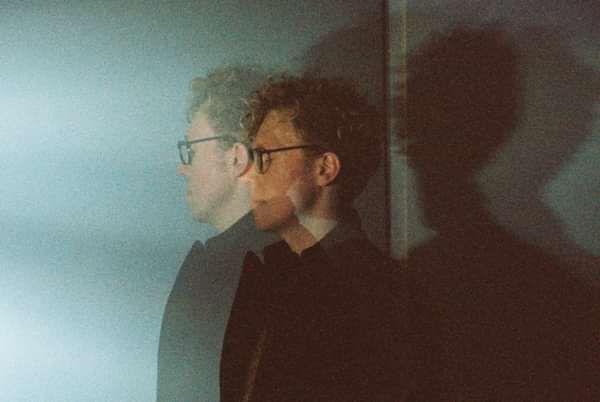