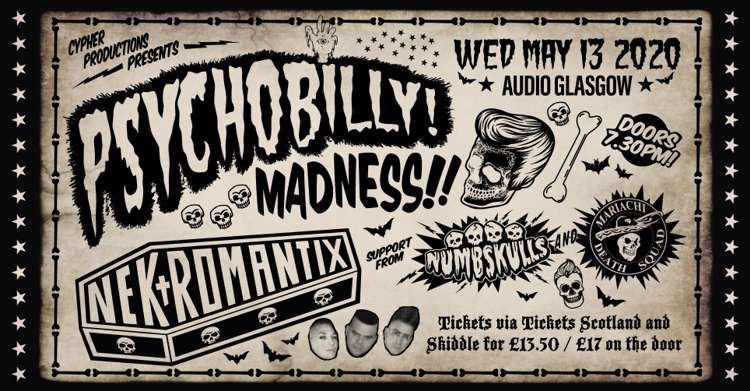 Never self-serious while far from a joke at the same time, Nekromantix is a musical unearthing of the biggest themes from the greatest works of monster, zombie, vampire, werewolf and b-horror fiction; ripped from literature, comic book pages or classic celluloid. Nekromantix chases a darkly romantic muse with an even darker humor.

The Nekromantix catalog boasts enduring genre classics like the unapologetically hooky yet undeniably fierce “Who Killed the Cheerleader?” and “Gargoyles Over Copenhagen” alongside subversively sentimental cuts like “Haunted Cathouse” and “Subcultural Girl.” There are echoes of rock n’ roll’s greats and punk rock icons alike, all with modern flair.

Scottish psychobilly punks Numbskulls SCO will be playing in support - first active in the late 80s, their debut release in 1991 'Psychophobia' on Kix4u Records showcased their unique blend of fast, heavy and fun music. The band released 'Life in Limbo' in 1996 before a long period of inactivity. 'Back Fae the Deid' was released on Diablo Records in 2017 with the band picking up where they left off, fast and frantic!

Also featuring Mariachi Death Squad, a point breakin', reverb crashin' instrumental power surf rock trio. They reside in Edinburgh but span continents. The effect of Mariachi Death Squad is like the Fujiwara Effect when, after a beautiful and intricate dance, everything is blown away.