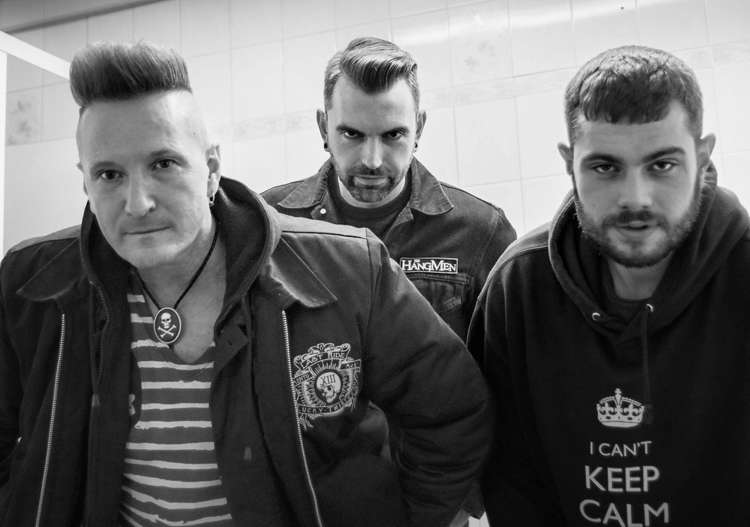 Described as an explosive live act with a track record spanning the USA, Canada and Russia via most European countries between many times over, the UK trio have straddled many ‘Psychobilly’ and ‘Punk’ circuits since the 1990s. A trail of unchartered sweaty rock dives form part of an ongoing legacy garnished with eight albums worth of original material released on a host of international independent record labels. Now back on Crazy Love Records for their ninth album release, the long awaited next chapter in dark Punk Rock n' Roll will soon be upon us.

The Hangmen are a genuine, pioneering, Garage Punk Rockabilly hybrid that throttles the definitive primitive ensemble of guitar, double bass and drums using self-penned compositions laced with convincing psychotic horror undertones, exhuming that unholy grail of Rock & Roll - a distinctive sound of their own. The Cramps, The Meteors, The Misfits, Motorhead, Reverend Horton Heat, The Sex Pistols, Tom Waits, Eighties Matchbox B-Line Disaster and Screaming Jay Hawkins – all comparisons and influences that collectively illustrate the difficulty in defining a band that ultimately defines itself as moody and frantic, post-punk outlaw rockers smoldering with real energy.

Support on the night will be from The Three N Eights with their rock n roll played with a double shot of ska. Also The Bikini Bottoms treating attendees to swamp stained surf rockabilly and of course The Best Bad Influence - echoes of the Stray Cats with influences from the likes of the Clash.